He was seen to be generally worried about his comrades, as well as of losing.

Tanzō has short black hair and wears his forehead protector around his neck, covering his chin. He also wears a high collared shirt that was half black and half grey along with a pair of grey pants. His shuriken holster is strapped to his right leg.

He and the rest of his team made it to the second phase of the Chūnin Exams. While he was out hunting, Shibire and Minoji decided to open their scroll, the contents of which knocked them out. Tanzō returned to find them in this state. Unable to revive them, they were disqualified.

In the anime, about two years later, Tanzō and his team entered another Chūnin Exams sponsored alongside Sunagakure. For the first exam, the teams were all split up to take the written test in separate rooms. Tanzō was placed in room 3. Shikamaru Nara as proctor explained that everyone only needs to answer one question on the test but their combined score with their teammates will determine if they pass or fail the exam as they need exactly 100 points to pass. Unclear how to solve the problem, Tanzō heard the genin from the other two rooms calling their comrades, leading him to scream their names as well.[2]

Following the conclusion of the three question choice test, a bonus question was given by the proctor, asking to which teammate you would leave as a decoy, and the team's answer had to be unanimous. His team managed to qualify for the second round since they left the answer blank, proving to be the right choice since a full team is needed for the second round. However, a preliminary round had to be issued to lessen the many participants there were. The preliminary round involved a race to Suna where only the first 30 teams to arrive at the destination would qualify for the second phase.[3] Unfortunately, his team didn't make the cut and thus they were disqualified.[4] 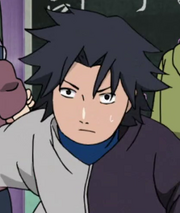