Team 10, also known as Team Moegi, is a Konohagakure team formed under the leadership of Moegi Kazamatsuri. The team is comprised of the 17th and most recent generation of the Ino–Shika–Chō trio: Inojin Yamanaka, Shikadai Nara and Chōchō Akimichi.

The team takes part in the Chūnin Exams and advances to the final stage: Shikadai defeats both Yodo and Boruto (due to a disqualification), while Inojin loses to Araya, and Chōchō loses to Shinki. In the anime, only Shikadai is promoted to chūnin.

Team 10's first mission was to guard and escort a madame to an unknown location.

Gather intel and locate the Byakuya Gang (Anime only)

With the continued thefts performed by the Byakuya Gang throughout Konohagakure, Team 10 was assigned alongside the other genin teams to help stop the self-proclaimed noble thieves. However, the genin were not permitted to engage the Byakuya Gang without aid from a chūnin or higher-ranked shinobi.

A joint mission with Team 7, the two teams were assigned to protect two Konoha Film Studio actors, Tomaru and Ashina, from a death threat. Team 10 was designated to protecting Tomaru, in which they seemingly failed when Tomaru was abducted by the blackmailer. When a ransom for Tomaru's safety — to be delivered by Ashina — was demanded, Konohamaru managed to capture the kidnapper and disguised as him in order to expose Ashina as the mastermind of the fraudulent ploy to revitalise her fame. With Tomaru's safety and Ashina's arrest, the mission was a success.

Retrieve Boruto and Sarada (Anime only)

When Boruto and Sarada left the village in lockdown to pursuit their escaped team-mate Mitsuki, Team 10 was assigned to bring the two back. Shikamaru decided Team 10 should be the one to do it on account of Konohamaru not being objective after learning of Mitsuki's parentage, and Shikadai knowing Boruto well enough to anticipate his actions.

A joint mission with Team Shinki, Team 10 was assigned to help relocate the last puppet used by Urashiki Ōtsutsuki as Shikadai knew where it was. However, Deepa interfered, and defeated both teams to take the puppet for himself. Shinki, however, managed to destroy the puppet, causing Deepa to abandon the broken fragments. 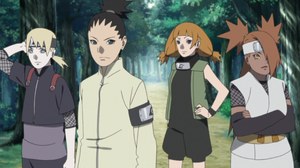