Asuma takes his Nijū Shōtai team to the Fire Temple to pay his respects to Chiriku. Since Chiriku's body was the only one to not be recovered, they theorise that Akatsuki is collecting the bounty on his head. The team heads for the nearest bounty station and sends word to the other Nijū Shōtai teams to check the others. In Konoha, Naruto is exhausted from all of his training. Kakashi takes Naruto to the Ramen Ichiraku and tells him there is something he wants to show him.

After leaving the Ramen Ichiraku, Kakashi reminds Naruto that creating a technique requires combining nature transformation with shape transformation. By completing his Wind Release training, he has the former, and since he can already perform the Rasengan, he has the latter. Naruto concludes that creating a new technique will be easy since he has already mastered both components, but Kakashi corrects him by showing that he can also use the Rasengan. Combining nature transformation with the Rasengan was too difficult for Kakashi and the Rasengan's creator, the Fourth Hokage. Kakashi is confident that Naruto will succeed where they failed. Elsewhere, Shikamaru points out that Asuma hasn't smoked a cigarette since learning of Chiriku's death, a sign that something is bothering him.

Asuma admits that he hasn't smoked recently, but insists it is not because of worry over a fight with Akatsuki, although he is concerned about how they will fare. In Konoha, Naruto and his shadow clones struggle to combine Wind Release with the Rasengan, a process that is frustrating enough that some clones lose control of the Nine-Tails' chakra. Yamato suppresses them. Elsewhere, Hidan waits outside a bounty station for Kakuzu to finish his business. Asuma appears and attacks him, though Hidan blocks the attack. Before he can retaliate he is captured by Shikamaru's shadow, giving Izumo and Kotetsu a chance to strike. They believe they have killed him, but Hidan merely asks who they are.

Izumo and Kotetsu rhetorically ask if Hidan is immortal, which he confirms. Asuma had intended to kill Hidan and capture his partner, but given this development decides to switch the fates of the Akatsuki members. Since Hidan is captured by Shikamaru's shadow Asuma goes looking for Kakuzu, but finds Kakuzu attacking Shikamaru in order to release Hidan. The Konoha ninja regroup while Hidan, freed, draws a design on the ground with some of his blood. Asuma engages him in battle while Shikamaru observes and Kakuzu refuses to participate. Hidan injures Asuma with his Triple-Bladed Scythe and, after licking some of Asuma's blood off the scythe, transforms.

With Hidan in his transformed state, Asuma finds that all the damage he does to Hidan is also done to him. This also applies to damage that Hidan does to himself, a fact he takes advantage of by stabbing himself to immobilise Asuma. He tries to stab himself in the heart to finish of Asuma, but is caught and stopped by Shikamaru's shadow. While straining to keep Hidan from finishing his attack, Shikamaru analyses his actions and discovers how Hidan has linked himself with Asuma.

Shikamaru explains that Hidan's link with Asuma was created when he consumed some of Asuma's blood. However, in order for this link to do anything, Hidan must stand within the boundaries of the design he drew on the ground earlier. To break the link, Shikamaru forces Hidan out of the design and ties him down. Asuma tests Shikamaru's theory by inflicting harmless wounds on Hidan, which do do not occur to himself. Content, Asuma cuts off Hidan's head. Hidan's head yells at Kakuzu for not stopping Asuma before this happened.

Kakuzu sews Hidan's head back onto his body. With Shikamaru exhausted, Asuma tries to escape with his team, but Kakuzu blocks their exit. Izumo and Kotetsu attack him while Asuma goes after Hidan, intending to stop him from restoring their link. Hidan strikes with his Triple-Bladed Scythe. Asuma dodges and it strikes Hidan, but he discovers too late that Hidan has returned to the Jashin symbol that causes them to share damage. Asuma doubles over from the pain the scythe has done to Hidan while Hidan, despite Shikamaru's attempts to stop him, stabs himself in the heart.

Asuma collapses while his team watches helplessly. Kakuzu prepares to finish off, Izumo, and Kotetsu, but is stopped by Aoba Yamashiro and Raidō Namiashi. Chōji gets Asuma to safety while Ino checks on Shikamaru. Shikamaru immediately goes to Asuma's side and, finding that he is still alive, has Ino perform emergency first aid. Kakuzu, wishing to collect the bounty on Asuma's head, tries to take him back, but he is interrupted by the summons of the Akatsuki leader.

Hidan and Kakuzu reluctantly leave, telling the Konoha ninja not to go anywhere. The Nijū Shōtai members gather around Asuma but Ino finds that his injuries are too severe for her to heal. Shikamaru tries to rush him back to Konoha but Asuma tells him it is too late for him. He only asks his students listen to his final words. He tells Ino to look after Chōji and Shikamaru and encourages her to not lose to Sakura in any pursuit. He asks Chōji to go on a diet, but tells him not to let that interfere with his good heart. He praises Shikamaru and secretly tells him the identity of the king from their earlier shōgi-Konoha analogy. After smoking one last cigarette, Asuma dies. Shikamaru finishes the rest of the cigarette, but complains that the smoke stings his eyes.

Naruto continues to struggle with combining Rasengan with his Wind Release chakra. He suggests that it is impossible, like looking to the left and right at the same time. To lighten the mood, Kakashi creates a shadow clone to let him do just that, giving Naruto an idea. Meanwhile, Akatsuki is busy sealing the Three-Tails. Hidan, irritated that his battle had to be interrupted, asks why Akatsuki is capturing the tailed beasts. The Akatsuki leader explains that it is to develop a monopoly over wars by using the tailed beasts as weapons, thereby gaining control over the world. 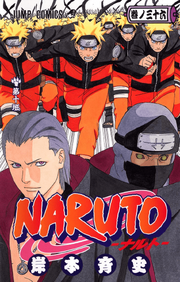