Tekka Uchiha (うちはテッカ, Uchiha Tekka) was a Konohagakure shinobi from the Uchiha clan and an officer of the Konoha Military Police Force.

He, Inabi, and Yashiro questioned Itachi about the suicide note that was found with Shisui Uchiha. After presenting Itachi with the alleged suicide note that Shisui had written asking him to request that the Anbu investigate the matter as well. As the men began leaving, he warned Itachi not to hide anything as they also had connections within the Anbu. The men were then attacked by Itachi and fed up with him they asked Fugaku to issue the order for them to arrest him. However, after Itachi apologised and Fugaku offered up the excuse that Itachi had been worn out by his duties, the men left.[2]

Tekka and the rest of the clan were later killed during the Uchiha Clan Downfall. In Book of Dark Night, Tekka sensed the disappearing chakra signatures throughout the clan's compound. Before he could leave his home to investigate, he was confronted by Itachi. He attempted to catch Itachi in a genjutsu, but was overpowered by the much stronger genjutsu of Itachi's Mangekyō Sharingan. Itachi stabbed Tekka in the stomach and watched him die.

Tekka was a very calm and composed person not speaking much unlike Inabi and Yashiro. He was also very confident in his own abilities as a member of the famed Uchiha clan.

Tekka had shoulder-length, dull-black hair and dark eyes and also had a dot in the centre of his forehead. He wore what was considered to be the standard outfit of the Uchiha while not on duty which included a black, high-collared shirt with the Uchiha crest on the back and dark coloured pants. While on duty he wore the standard uniform of the police force which consisted of the standard Konoha shinobi's outfit albeit with the crest of the police force on either sleeve.

As an Uchiha, Tekka was one of the members that was able to awaken his clan's kekkei genkai: the Sharingan,[3] which granted him basic abilities such as seeing the flow of chakra, the ability to easily recognise genjutsu and different forms of chakra, some predictive capabilities as well as the ability to copy techniques that the user sees amongst other things. 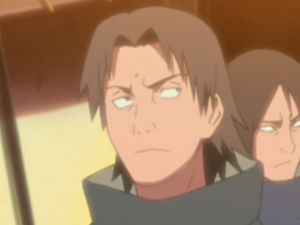