Tekuno is a very jovial, food-loving, laid-back and charismatic person as seen during a mission and even after when he jokingly boasted of his actions. He can also become very serious as seen when fellow jōnin Hayama Shirakumo told him the situation surrounding their mission. He has a great sense of duty to both protect those lower in rank than him as well as the village.

Tekuno has a robust build and shaggy brown hair. He wears the standard attire of a Konoha shinobi along with fingerless gloves. He also wears his flak jacket unzipped under which he wears a utility sash which holds several scrolls. Like Hayama, his shirt only has the traditional red, swirl pattern on his left-sleeve's shoulder.

His abilities primarily revolve around the use of heavy explosive artillery and is also highly skilled at setting traps. He uses wires with great proficiency, often incorporating them into his traps- laying them all over the battlefield, then, manipulate them in such a way that he could trap multiple enemies at once. During a mission he was shown summoning a crossbow and cannon that he used to fire projectiles with explosive tags attached to them. Along with this weapon he also summoned a few katana, so it can be assumed that he is skilled at kenjutsu as well.

He was assigned to a squad along with Hayama Shirakumo, Kosuke Maruboshi and Naruto Uzumaki to protect the northern boundaries of the village after Suna and Otogakure's invasion of the village. During their mission he was assigned to set traps around the area. Not long after they were ambushed by a battalion of ninja from Iwagakure. Tekuno's traps proved useful in hindering the progress of the ninja but when they had breached these securities, he stayed behind to allow the other members of the squad time to escape and report to the village. He summoned a crossbow with explosive tags attached to the projectiles and along with Hayama wiped out the majority of the ninja. Together the team was able to wipe out dozens of Iwa ninja.

He was later seen aiding to restore the village after Pain's assault bragging about his heroism during the mission.

During Naruto's flashback to the members of the village when he was gathering natural energy to enter Sage Mode, Tekuno can been seen alongside, Hayama and some other villagers. 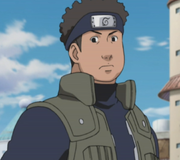