Kimimaro parts his fingertips, creating holes that expose hardened finger bones. In volleys (five per hand), he shoots these bone bullets at a target by swinging his hand,[2] causing a loud sound as they're fired. The bullets travel incredibly quickly through the air and take a spinning motion. Upon impact, the bullets tear through skin, flesh, and bone.[1] The bullets aren't able to penetrate the Shield of Sand,[3] but in the anime, they can pierce samurai armour.[4] Kimimaro relies on this technique for his long-range attacks.[1] 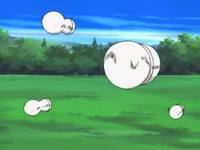