Naruto finally wakes up. Believing that Orochimaru is still around, he warns everyone to hide, but is surprised to find that, not only is Orochimaru gone, but that the members of Team 10 and Team Guy are here and that Sakura has cut her hair. Ino offers to even out Sakura's hair and everyone rests from the encounter with Team Dosu. Meanwhile, Anko returns to the building in the centre of the Forest of Death to report on her failure to apprehend Orochimaru. Before she can speak with the Third Hokage on the matter, one of her assistants brings her a security tape from ten hours earlier: a genin team that completed the second phase in only ninety-seven minutes. 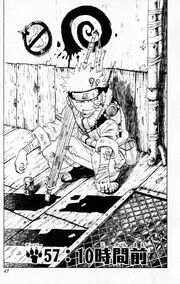