Tenji (テンジ, Tenji) was an emperor of the Land of Ancestors.

Tenji lived before the establishment of shinobi. He served as an emperor from the Land of Ancestors. At the time of his first encounter with Kaguya Ōtsutsuki, his land was at war with the Land of That over disputed land ownership. Unlike his followers and the residents of the Land of That, Tenji desired for peace and tried to avoid direct confrontation with his opponents in order to avoid a war being waged, and wanted peaceful negotiations and alliances with them.

When he met Kaguya, he was surprised to learn she came "from the stars", but he took an immediate interest in her once she told him that she desired for peace, just like him. He allowed her to continue living on his land and fell in love with her. They became lovers and he visited with her every day, and rumours of their relationship reached the Land of That. His devotion to Kaguya's cause for peace caused him to threaten his own followers with death if they dared to threaten peace with the Land of That.

After Suzaku, the minister of the Land of That, tried to kidnap Kaguya and she killed many of his soldiers in self-defence, Tenji was horrified of Kaguya's god-like powers and ultimately decided to betray his lover in order to prevent a war from breaking out. However, as the two sides attempt to capture Kaguya, she ate the fruit of the God Tree and, with her new powers, casts the Infinite Tsukuyomi. As Tenji fell victim to the genjutsu, he asked Kaguya what she was, unaware that she was pregnant with his children.

As an emperor, Tenji was an honourable and good-hearted person who always cared about his land and people. He was very much a seeker of peace and was willing to do anything to avoid violence and death, even making peaceful negotiations with his enemies. Moreover, he didn't seem to harbour any disdain towards his enemies, such as when the Land of That tried to use a fabricated map to steal property from the Land of Ancestors. Tenji loved Kaguya dearly and was protective of her, as they both desired a world of peace. However, his love for peace proved to be far greater than his love for Kaguya, as he was willing to betray and have her killed to keep war from breaking out.

The full extent of his abilities were unknown, with the exception of him being capable of firing a bow. 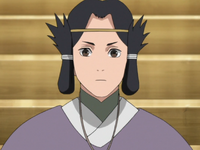