Tenma Izumo (出雲テンマ, Izumo Tenma) was a genin from Konohagakure and a member of Team 2.

During his time in the Academy, Tenma and his classmates, Hagiri and Katsura, developed a reputation as bullies who would pick on younger students when none of the teachers were around. When they first encountered Itachi Uchiha, a first-year, Tenma and the others confronted him about his clan's supposed involvement in the Nine-Tailed Demon Fox's Attack, wishing for retribution for the death of their relatives (Tenma's uncle died during the attack). Itachi denied knowing anything about the attack and therefore refused Tenma's demands for an apology. Tenma attacked him, which Itachi avoided using a crow clone. The fight was stopped from escalating by Izumi Uchiha, whose Sharingan scared off Tenma and his friends.

After graduating from the Academy, Tenma was added to Yūki Minazuki's Team 2, alongside Shinko Inari and Itachi. Tenma was furious to be teamed with Itachi, prompting Shinko to accuse him of being jealous of Itachi's prodigious skills. Tenma denied this, but nevertheless made obvious attempts to prove himself superior to Itachi while they were on missions together: during a mission to capture an Iwa-nin spying on Konoha, rather than follow the plan of tracking the spy and waiting for a chance to surround him, Tenma went after him on his own. He was nearly killed in the process, saved only because of Itachi's quick intervention. Afterwards, Tenma tried to assert he was never in any danger, but did finally acknowledge that Itachi was better than him and thanked him for the help.

Team 2's performance during its first year - thanks in large part to Itachi - earned them the ceremonial honour of being the Fire Daimyō's guard during his annual trip to Konoha. Along their planned route they were met by a masked man, who quickly used a genjutsu on them all; only Itachi and Tenma were able to fend off the genjutsu. Tenma instructed Itachi to join him in a counterattack, to which Itachi responded they needed to first assess the situation. Tenma ignored this and continued his attack, only for it to pass through the masked man harmlessly. The masked man reprimanded Tenma for not being as cautious as Itachi was and then killed him: in the novel, the man thrust his arm through Tenma's body; in the anime, the man cut Tenma down with a sword.

Tenma was a haughty and prideful child and did not take others outshining him well. When he and his friends saw Itachi, who was five years their junior, was already graduating with them and hailed to be better than them, he did not take it well at all. When he was placed on a team with him, Tenma's own attitude refused to change. However after Itachi saved Tenma's life, Tenma finally acknowledged Itachi's superior skill, but maintained that Itachi had a bad personality and thought too highly of himself.

Tenma had somewhat long, grey hair and black eyes. His hair was spiked more so towards the right side and his bangs framed his face. He wore a blue Konoha forehead protector that his bangs hung over the sides of.

Tenma dubbed himself "Fleet-foot Tenma" (艦隊の足テンマ, Kantai no Ashi Tenma) ("Speedy Tenma" (疾駆けのテンマ様, Hayagake no Tenma-sama, literally meaning: Rapidly Running Lord Tenma) in the anime),[1] suggesting he is fast. He is skilled enough in genjutsu to free himself from the masked man, which not even two of the Twelve Guardian Ninja were able to do.

In the novel, Tenma stated his specialty was genjutsu. 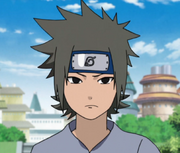