View source
watch 01:37
What is the Tenseigan?
Do you like this video?
Play Sound

The Tenseigan (転生眼, literally meaning: Reincarnation Eye) is a dōjutsu introduced in The Last: Naruto the Movie. The movie's novelisation explains that the Tenseigan can be acquired when an Ōtsutsuki is implanted with the Byakugan of a Hyūga: this combination of the two clans' chakra transforms the Byakugan into Tenseigan. When Toneri Ōtsutsuki implants himself with Hanabi Hyūga's Byakugan, the transformation takes several days to complete. As the transformation advances, Toneri experiences increasingly painful pulsations in his eyes that subside with rest.

When the Tenseigan is finally achieved, the ordinarily featureless white Byakugan gain blue pupils filled with what resemble overlapping white flower patterns. Toneri plans to use these Tenseigan to destroy the Earth by colliding the Moon into it, and after the Earth's population is wiped out Toneri would use his Tenseigan to revive the planet anew. Before he can follow through on these plans, he is drawn into combat with Naruto Uzumaki. Toneri uses his Tenseigan to animate a gigantic golem that he directs against Naruto. He also enters Tenseigan Chakra Mode, giving him several Truth-Seeking Balls as well as the ability to fly. Although the Tenseigan Chakra Mode's power enables Toneri to do extensive damage to the Moon's surface, the form itself is fragile, dispelling after a single punch to the face from Naruto; when this happens, Toneri's Tenseigan also revert back to Byakugan. The Byakugan are immediately afterwards removed from him.

The Last: Naruto the Movie makes several mentions of Hamura Ōtsutsuki's Tenseigan, but most or even all of these turn out to be in reference to an energy vessel with the same name. A passage in the movie's novelisation can be read as the energy vessel having been created after Hamura's death, to preserve the power he wielded in life. Conversely, Retsu no Sho states that the energy vessel was created while Hamura was alive and at his direction.[1] As such, it is unclear whether or not Hamura possessed the dōjutsu version of the Tenseigan, and if he did what he used it for. 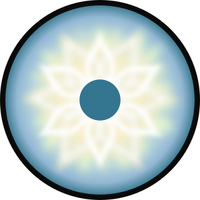