The Tenseigan Chakra Mode is a heightened transformation unique to those who possess the Tenseigan.

When Toneri activates this mode, he gains a cyan-coloured chakra shroud with six magatama markings on his collar, dark markings over his eyebrows and lower eyelids, and a single horn shaped like Kaguya's extending from his forehead. The shroud constantly radiates flickering flames of chakra, and his clothing and hair continuously billow upwards as if caught in a strong breeze.

This mode is said to be roughly on par with Naruto Uzumaki's senjutsu-enhanced Nine-Tails Chakra Mode. Upon activating this form the user gains access to nine Truth-Seeking Balls, and Toneri displayed the ability to amplify their power by infusing them with chakra, turning them into glowing cyan orbs. In addition to shaping them into shields and dividing them into smaller orbs to launch high-speed barrage attacks, he was also able to transform a single orb into an ornate cage which he used to imprison Hinata Hyūga while battling Naruto. The Truth-Seeking Balls were also utilised in his Silver Wheel Reincarnation Explosion and Golden Wheel Reincarnation Explosion techniques, which he used to create an incredibly powerful silver typhoon that obliterated the moon's crust and a massive golden sword that cut the entire moon in half. 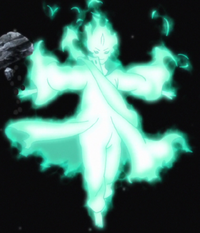