As a teenager 34 years before the Fourth Shinobi World War, Teuchi devoted his life to making ramen.[3] More than a decade later, he had a daughter called Ayame.

Teuchi is a very kind and jovial man. Often seen smiling, he and Ayame have always treated Naruto Uzumaki well, considering him their best customer, sometimes even giving him free ramen on special occasions. He also cares for Naruto as he often asks Naruto if what was going on if he hasn't seen him in a while.

Nevertheless, he is a stern businessman and will lash out at his employees when they make mistakes such as sticking their thumb in a bowl of ramen. He has also been described as stubborn, obstinate, and having the temperament of a craftsman.

The day before the third stage of the Chūnin Exam, Teuchi and Ayame served Naruto a free and expensive bowl of Ramen as a way of saying thank you for being their favourite customer and a way of saying good luck.

He witnesses Jiraiya and Naruto head off to Shukuba Town, and is later asked where they went by Sasuke Uchiha.

In the anime, Teuchi tries to make a new ramen after he finds out that his daughter Ayame was kidnapped by Hakkaku, who wanted Teuchi's recipe. Naruto, Chōji Akimichi, and Sakura offer to help him. Teuchi tries to teach them how to cook ramen. When they confront Hakkaku and his cooking-nin, the three take advantage of their ninja techniques to make the perfect bowl of ramen. After Hakkaku and the cooking-nin ate the best ramen, Teuchi explains that the recipe was just to remove the bitter taste from the soup. When they rescue Ayame, they became shocked as they noticed she has grown fat due to being unable to resist the cooking-nin's food, much to Teuchi's dismay. After saving his daughter with the help of Naruto, Sakura, and Chōji, he develops a diet for Ayame to bring her to her regular self and the diet ramen appears to be part of the menu for the customers to lose weight from eating it. Also, he had eaten the diet ramen, however he lost too much weight, much to Naruto and the others' shock from seeing him.

In the anime, during the large scale power outage, Teuchi went outside Ichiraku and accidentally hit two villagers in the head. He stated that the Hokage can handle the issue and that the villagers shouldn't worry.

After Naruto managed to cut the waterfall in his wind natured chakra training, he was treated to some ramen at Ichiraku. However Teuchi kept rejecting the ramen made by his apprentices Matsu and Nishi before Naruto could eat it, and was quickly getting angry with them, claiming that they kept making these stupid mistakes.[4]

In the anime, Teuchi is seen working behind the bar with his daughter, Ayame, while Naruto and Jiraiya discuss about dealing with Itachi and Sasuke.[5]

Soon after Tsunade regained consciousness, Sakura burst into Ichiraku to inform Naruto and Teuchi about what happened. Upon hearing the good news, Teuchi offered a bowl of ramen to both Naruto and Sakura, on the house, which Naruto accepted, but Sakura declined. Just as Naruto was about to eat he was reverse-summoned to Mount Myōboku, much to Teuchi's confusion. When Naruto reappeared in Ramen Ichiraku, Teuchi asked where his best customer disappeared to. When Naruto was asked by the other ninja customers for his autograph, Teuchi thought proudly at how Naruto was being called the "Miracle boy" and at the irony at how not so long ago he was thought of as the opposite. Teuchi then asked the other customers to allow Naruto to finish his meal before he signed anything.

In the anime, Teuchi is seen in Konoha talking to his daughter after being freed from the Infinite Tsukuyomi by Naruto and Sasuke.

During the Rinne Festival, Teuchi made ramen for Naruto's friends and fans, proclaiming it's on Naruto himself. After Toneri Ōtsutsuki's defeat, Teuchi later hears the worldwide announcement about the Moon crisis being averted amongst many other villagers.

Main article: Konoha Hiden: The Perfect Day for a Wedding Teuchi reflects on how good business has been at Ichiraku Ramen recently and how the naruto topping has seen a reversal in popularity: it used to be the least popular, easily eclipsed by seaweed; now seaweed, though still popular, is second to naruto. In fact, Teuchi cannot prepare enough naruto to meet the demand. The reason for this is because of Naruto Uzumaki's importance to Konoha, with standard customers craving naruto whenever there is news of Naruto, and with shinobi hoping that eating at Ichiraku Ramen will bring them the same success on their next mission as Naruto has always had on his.

Teuchi has been serving Naruto ramen since he was a young boy, back when most of the village hated and despised Naruto. Teuchi didn't care what the rest of the village thought of Naruto; Naruto loved ramen and Teuchi loved preparing it for him. Since ramen has been the extent of their relationship all these years, Teuchi was surprised to be invited to Naruto's wedding. He decides that giving Naruto free ramen for a year would be the most appropriate wedding gift. Teuchi then realises how much ramen Naruto can eat, and starts decreasing the duration of the offer, but every span of time he considers leaves him with visions of Ichiraku Ramen going bankrupt and his daughter being put out on the street. He also has visions of Naruto's smiling face whenever he finishes a bowl of his ramen. Teuchi settles on giving Naruto free and unlimited ramen for the rest of his life.

Teuchi is later seen at Naruto and Hinata's wedding, using his daughter to attract business for Ichiraku Ramen.

In the following years, due in large part to Naruto's world-wide fame and his well-known love of Ramen Ichikaru, the villagers and tourists who came to see Naruto began flocking to the small restaurant. This and making Naruto the official face of Ramen Ichiraku made it vastly popular. Thanks to this, along with Konoha continuing to prosper and modernise, Ayame and her father were able to afford remodelling their restaurant into a large indoor building to seat many.

He is seen when Naruto is at Ramen Ichiraku after he escaped from the hospital.

Teuchi is seen in a flashback, on Ramen Ichiraku grand opening, twenty years in the past. The first day seemed to be a success, as he had a huge line of customers impatiently waiting for his half price ramen. 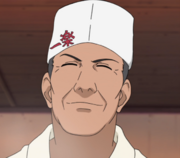