Naruto and Sasuke are startled by Kawaki's presence. Isshiki greets Kawaki. At Konoha, they're confused about Kawaki's disappearance, and Amado considers they're out of options. Kawaki understands Isshiki wants to rebrand him. Isshiki muses on how little time he has left, and how far he was pushed. Kawaki retorts he's glad he gets to watch Isshiki die. Isshiki counters it'll only be a short nap until he's reborn in Kawaki's body. Naruto tells him to run, so Isshiki stomps him hard enough to force him out of Baryon Mode. Kawaki rushes away, but Isshiki intercepts him and grabs him by the throat. Before he can rebrand Kawaki, Sasuke switches places with him. Sasuke yells for Kawaki to pick up the sphere he prepared and throw it at his feet, which Kawaki does. It's a smoke bomb.

Isshiki beats Sasuke into the ground, and says tricks won't hide him from the Byakugan. However, the bomb was made with a special mineral that blocks such abilities, buying Kawaki time for Isshiki's life to run out. Isshiki flies up in the air, but still can't find Kawaki. Furious, Isshiki crashes down at Naruto, and threatens to kill him if Kawaki doesn't give himself up. Holding his prosthetic hand, Kawaki thinks back to hiding from Jigen and being punished when he was discovered. He thinks back to being accepted as Naruto's student. Kawaki reveals himself, and Isshiki flies at him, ignoring a Fire Release Kawaki throws at him. Isshiki grabs him, and berates him for thinking he's a shinobi when he's only a vessel for him. Kawaki disputes it, saying Naruto said he had a knack for it, and that he gave him a reason to live. Isshiki points out the affection he has for Naruto caused him to give himself up either way. Kawaki is staunch that a world without Naruto is worthless to him and he'd rather die. Isshiki applies a Kāma to Kawaki and celebrates, satisfied. His body begins to break down. The Kāma applied to Kawaki begins to vanish, shocking and infuriating Isshiki. The real Kawaki reveals himself, the one Isshiki branded merely a shadow clone. Kawaki berates Isshiki for being outsmarted and defeated by a mere vessel. Kawaki jumps down and lands on Isshiki's crumbling body. Naruto is surprised by Kawaki's shadow clone, though he says he can barely make one. Sasuke approaches, and pointedly asks about Naruto's new power. Kawaki is also interested. Suddenly, Boruto rushes at them, stabbing Sasuke's Rinnegan. Sasuke falls to the ground. Speaking through Boruto's body, Momoshiki admits surprise that they defeated Isshiki, but is glad for it, and declares them the only nuisances left. 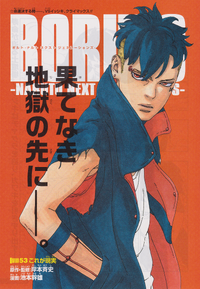