The Abilities of the Shinobi…!!edit

With Jiraiya unable to fully control his chakra, Naruto tries to summon a toad larger than Gamakichi for him to use. He can only summon Gamatatsu, Gamakichi's younger brother. Orochimaru and Kabuto, each riding a snake, attack. Jiraiya is able to trap Orochimaru's in a swamp, but Kabuto's manages to catch Naruto in its mouth. As Naruto struggles to escape, Kabuto fights Shizune and quickly subdues her. He then turns his attention to the still-paralysed Tsunade. Jiraiya and Orochimaru exchange blows but, being unable to do much to each other, discuss their respective interests. Orochimaru says that nobody can compare to Sasuke, an Uchiha, but Jiraiya says that natural skills do not compare to someone with Naruto's determination. At that moment, Naruto blocks Kabuto's attack. 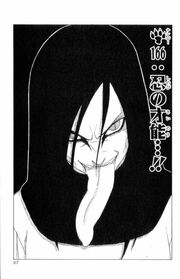