Killer B develops a chakra shroud that he attacks Taka with. Although they are able to dodge, Sasuke realises that they will not be able to do so indefinitely. He uses his Mangekyō Sharingan to catch B in a genjutsu and, believing he has won, lets down his guard. The Eight-Tails releases B from the illusion, so he attacks and fatally injures Sasuke. While Jūgo heals him, B fully transforms into the Eight-Tails.

Seeing the power of the Eight-Tails, Taka flees. Suigetsu uses himself as a shield to block the beast's attack. While the surrounding area is destroyed, Taka is kept safe. Suigetsu is knocked unconscious from the attack and Sasuke, determined not to lose his teammates, uses Amaterasu. Meanwhile, Naruto is able to start using senjutsu on his own.

Sasuke's Amaterasu ignites Killer B in his full Eight-Tails form. As he rampages around in pain he almost crushes Karin. Sasuke cuts off his tentacle to protect her. The form recedes, leaving only B, defeated. Taka collects him and its unconscious members and takes them away. Observing Kumogakure ninja see this and send word to the Fourth Raikage of B's capture. At Mount Myōboku, Fukasaku explains the advantages of Sage Mode to Naruto. Naruto begins thinking about how senjutsu will allow him to complete his technique, but is distracted by Fukasaku's gift of The Tale of the Utterly Gutsy Shinobi.

Naruto reads The Tale of the Utterly Gutsy Shinobi, a story about a ninja named Naruto that vows to free the world from a cycle of hatred. Naruto is brought to tears by memories of the book's author and his teacher: Jiraiya. Elsewhere, Taka delivers Killer B to Tobi before setting off for Konoha. Tobi remembers a conversation he had with Sasuke, during which Sasuke explained his intention to kill every Konoha villager, not just those involved in the Uchiha clan's assassination. In Kumogakure, the Fourth Raikage learns of B's capture and vows to make Akatsuki pay for kidnapping his brother.

Naruto continues to practice with senjutsu, now focusing on using it without help from the special oil of Mount Myōboku. Elsewhere, Taka realises they have been followed and deals with the Kumogakure ninja spying on them. When the ninja's intelligence stops being sent to the Fourth Raikage, the Raikage calls for a meeting of the five Kage to discuss Akatsuki. He also calls for Team Samui, intending to send them to Konoha to inform the village that he will personally deal with Sasuke.

Naruto is finally able to enter Sage Mode on his own, allowing him to begin training to use it in combat. After sparring with Fukasaku, Naruto practices with his technique. In Konoha, the investigation into Pain is still ongoing. Inoichi is called upon to probe the mind of the Amegakure ninja that Jiraiya captured. Shizune also analyses the body piercings present on the Pain that Jiraiya defeated. On the outskirts of the village, the Six Paths of Pain arrive.

The Deva Path explains how the attack of Konoha will play out: some of the Six Paths of Pain will search for information on Naruto's whereabouts while the others draw attention to themselves by attacking the village's ninja and infrastructure. The new Animal Path infiltrates the village and summons the other Pains to its side. They then break up to fulfil their assigned roles. In Kumogakure, Team Samui sets out for Konoha, hoping that they can complete their assignment in time to save Killer B. Meanwhile, the available members of Akatsuki are busy extracting the Eight-Tails from B's body, only to find that it is a fake. The real B leaves the site of his battle with Taka, intending to take advantage of his supposed capture to seek out and train under Sabu.

Naruto continues to train with Fukasaku. While taking a break, Fukasaku informs Naruto that it is almost impossible to use Sage Mode by one's self in combat. Naruto believes his training has been a waste of time, but Fukasaku explains that they can fuse together to overcome this disadvantage. Elsewhere, Pain's assault on Konoha was underway. Iruka is found by the Deva Path, who asks where to find Naruto. Iruka refuses to tell him anything. The Deva Path tries to kill him but he is saved by Kakashi. Kakashi and the Deva Path start fighting while Iruka escapes, but Kakashi finds that he cannot get near the Pain for some reason. Meanwhile, Shizune finds that Pain's body piercings are really chakra receivers. News of Pain's invasion begins to spread through Konoha and Tsunade calls for Naruto's return.

Konoha's forces begin to mobilise, engaging the Six Paths of Pain in battle and protecting the fleeing villagers from harm. Kakashi continues to have trouble fighting the Deva Path, something that is not made any easier by the Asura Path joining the battle. Tsunade calls for Naruto's return to help in the fight with Pain, but the Konoha Council orders her not to, believing it would be best for Naruto, Pain's objective, to stay far away. Tsunade demands they have more faith in her judgement and Naruto's abilities, so they relent. Kōsuke is instructed to go to Mount Myōboku to tell Naruto about the village's crisis. He is killed by Danzō before he can leave, who intends to keep Naruto from getting involved.

Pain's search for Naruto continues, but none of Konoha's ninja are willing to tell him anything. Tsunade summons Katsuyu, who she instructs to seek out and adhere to every Konoha citizen so that she can monitor and heal them all remotely. Kakashi's fight with the Deva and Asura Path continues, but he cannot overcome their shared Rinnegan vision. The Asura Path modifies its body for battle and attacks him, but he is saved by a team led by Chōza Akimichi. 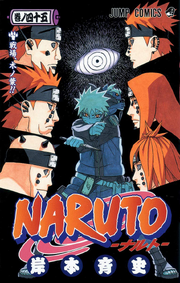