Gaara, Kankurō, and Team Shinki are on their way to Konoha by train for the Chūnin Exams. Shinki is fully committed that all three will be victorious, and confident their adversaries will be no match for them. Gaara tells them to be well-rested. In his room, Metal Lee trains. Sasuke teaches Boruto shurikenjutsu, and how deflecting his own shuriken can be used to hit targets. At home, Boruto recalls Katasuke's words about the Kote. Shikamaru and Sai administer the first exam, a true or false question about a book series. When both answers are shown to be incorrect, all teams fall into an ink pit. The teams who manage to keep themselves from falling into the ink pass.

Shikamaru informs Naruto that Boruto and his team passed, and advises him to congratulate Boruto. Naruto sends him an email, and Boruto scoffs at it. When Boruto is dissatisfied with Sasuke's assessment of his shurikenjutsu, he complains, saying that this is Sarada's specialty as an Uchiha. To counter it, Sasuke creates numerous shadow clones, Naruto's specialty. Boruto manages to create only four clones. In the second exam, teams have to protect their own flags while capturing the opposing team's. Teams Moegi, Yurui, and Shinki pass. Boruto stays back to protect their flag while Sarada and Mitsuki go on. Boruto and his clones take on a triplet team from Kiri, but the triplets can also use shadow clones, out-numbering him. Mitsuki turns back to help Boruto. When the triplets are on the verge of getting their flag, Boruto recalls Naruto's congratulatory email, and resorts to using the Kote, using Water Release and Lightning Release to defeat the triplets. Sarada uses her Sharingan to spot the real flag among genjutsu ones, securing victory for their team. Kōsuke, one of Katasuke's subordinates, informs him Boruto used the Kote, and that it was video recorded. 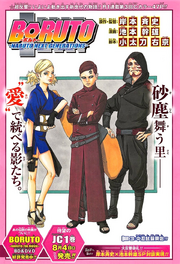