The Day of Departure!! (volume)

Shikamaru points out to Tsunade that a medical-nin should have been assigned to the Sasuke Recovery Team. She agrees, but says that being a medical-nin requires "something special". Shikamaru goes to visit Naruto in the hospital and gets confirmation that Sasuke would not come back to Konoha. Sakura overhears this but pretends not to, entering the room to see how Naruto is doing. Naruto apologises for failing but she avoids the subject. He persists, saying that he will one day fulfil his promise of bringing Sasuke home. Seeing how much Naruto has gone through, Sakura leaves after telling him that he won't need to fulfil that promise by himself next time. Sakura goes to see Tsunade and asks to learn how to become a medical-nin. Seeing that Sakura has that "special something", the desire to avoid losing those one is close to, Tsunade accepts.

Although Sakura has said she will help him find Sasuke, Naruto is unwilling to wait for her and wants to try again as soon as he is better. Jiraiya visits him and offers to train him since Akatsuki won't be coming after him for another three years. Naruto declines, saying he needs to take Sasuke back from Orochimaru. Jiraiya tells him that Orochimaru won't be able to take Sasuke's body for another three years. He also suggests giving up on Sasuke, having previous experience with his own futile attempts to persuade Orochimaru to change his ways. Only a fool, he claims, would pass up years of training to save someone who doesn't want saving. Naruto says he would rather be a fool. Happy with this answer, Jiraiya leaves, telling Naruto that they will leave for his training as soon as he gets out of the hospital.

Sasuke arrives at Orochimaru's base and makes clear that his only interest is gaining power. Sakura progresses through her medical-nin training rapidly. Kiba tells Shino about the mission he missed out on. Neji trains to overcome his Byakugan's blindspot with his uncle. Hinata arrives with some tea. Neji asks her whether she will see Naruto when he departs for his training. Kiba and Shino arrive, with Kiba saying how Hinata fainted when she saw Naruto all bandaged up, much to her embarrassment. Chōji takes advantage of his stomach's recovery with a feast, but expresses his desire to start training. Lee trains nonstop. Shikamaru says goodbye to the Three Sand Siblings as they leave Konoha. Naruto has a meal with Iruka before departing for his three years of training with Jiraiya. Hinata watches him go, vowing to become stronger too. Elsewhere, Akatsuki meets and resolves to accelerate their plans.

It is the time of the Third Shinobi World War. Obito Uchiha is running late, for which his teammate, a young Kakashi Hatake, reprimands him when he eventually arrives. Kakashi, having recently become a jōnin, is given gifts by his team-mates. Rin Nohara gives him a personalised medical-kit. Their master, the future Fourth Hokage, gives him a special kunai. Obito has forgotten to get him anything. Kakashi is to be the team leader for their mission to destroy the Kannabi Bridge, which will give Konoha an advantage over Iwagakure in the war effort. As they travel through Kusagakure they discover they are being watched by an enemy ninja. Kakashi decides to deal with the ninja with a new technique: the Chidori.

His master tries to stop him from attacking, but Kakashi reminds him that he is the team leader for this mission. Kakashi charges at the enemy with his Chidori, defeating wave after wave of shadow clones. When Kakashi finally reaches the real opponent, the speed of his Chidori leaves him unable to dodge a counterattack. His master saves him and quickly kills the ninja. He advises that Kakashi not use the technique again until he can overcome its drawback, and they rest for the night so that Kakashi can recover. Despite his injury, Kakashi continues to pick on Obito, drawing attention to each of his infractions of the Shinobi Rules. Though their master does not entirely approve, he explains how Kakashi's father, Sakumo Hatake, was disgraced when he didn't follow the rules and encourages Obito to be more understanding.

Minato Namikaze leaves his students Kakashi, Obito, and Rin to destroy the Kannabi Bridge by themselves while he goes to assist Konoha's forces on the frontlines. The three try to travel in secret but are found by enemy ninja looking for the ninja the team had encountered earlier. They kidnap Rin to see what she knows. Obito immediately tries to go after her, but Kakashi stops him, saying they must complete their mission first as the Shinobi Rules dictate. Obito lists a number of reasons why they should place saving a teammate above the mission's success, but Kakashi is unmoved. Obito leaves, saying that those who abandon their friends are scum. He also says that Sakumo Hatake, despite being disgraced when he abandoned a mission to save his team, was right to do so.

On the front lines of the Third Shinobi World War, Iwagakure's forces have almost defeated Konoha's. Despite this, when Konoha's Yellow Flash arrives, the surviving Konoha ninja are confident that the battle is about to turn in their favour. Meanwhile, Obito nears the location where Rin is being held captive. He is found by Taiseki, but before he can be killed he is saved by Kakashi, having been convinced to help because of Obito's words. Taiseki survives and tries to attack Obito again, but Kakashi saves him once more, though his left eye is damaged. Obito awakens his Sharingan and kills Taiseki to protect Kakashi.

Kakashi ignores his damaged left eye and joins Obito in confronting Kakkō, Rin's only remaining captor. They attack him and manage to release her. Kakkō, rather than let a group of kids continue to believe it would be that simple, causes a cave-in. Obito pushes Kakashi out of the way of falling debris. His right side is crushed and neither he nor his teammates are able to free him. Kakashi regrets allowing this to have happened, but Obito makes a proposition: since he never gave Kakashi a gift for becoming a jōnin, Kakashi can have his remaining Sharingan eye as a replacement for Kakashi's damaged one. Rin performs the transplant and Kakashi emerges from the rubble to face Kakkō.

"Side Story Final Story: The Hero of the Sharingan" (外伝最終話:写輪眼の英雄, Gaiden Saishūwa: Sharingan no Eiyū)

With his new Sharingan, Kakashi is able to overcome the Chidori's weakness; though the attack is still fast, the Sharingan gives him enough reaction time to avoid counterattacks. He kills Kakkō and returns to Obito's side. With Iwagakure reinforcements incoming, Obito asks Kakashi to take Rin away and protect her from harm. When the cave-in resumes, Kakashi reluctantly complies. Obito dies, regretting that he couldn't spend more time with his team while also regretting the fact that he couldn't tell Rin that he loved her. Kakashi attacks the newly arrived Iwagakure ninja to fulfil his promise, but soon loses consciousness. He awakes some time later to find the enemies dead, having been killed by his master. With Rin safe, they complete their mission by destroying the Kannabi Bridge. 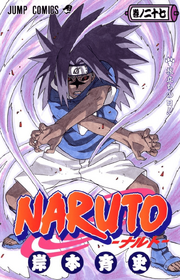