Since their Chidori and Rasengan are somewhat of equal power, Sasuke and Naruto are flung apart. Sasuke is angry that Naruto could match him, while Naruto is disappointed to find that Sasuke really did intend to kill him. As he tries to come to terms with this, he is attacked by Sasuke, who wants to finish the battle quickly. Naruto dodges and reflects on the long rivalry he has had with Sasuke as well as the fact that he was always secretly been jealous too. When Sasuke catches Naruto and prepares a finishing blow, Naruto, wondering if they were ever really friends, begins using the Nine-Tails' chakra.

Kakashi learns of Sasuke's defection and the Sasuke Recovery Team, an under-qualified team of genin, being sent to bring him back. He races from Konoha and instructs his ninken to find Naruto and Sasuke, hoping to reach them before they kill each other. Meanwhile, Sasuke has pierced through Naruto's shoulder with his Chidori. Having missed the heart, Sasuke begins to choke Naruto so that he can kill him and gain the Mangekyō Sharingan. The Nine-Tails' chakra begins to leak out before he can do so, forcing Sasuke to release Naruto and healing Naruto's injury. Naruto threatens to break all of the bones in Sasuke's body in order to keep him safe from Orochimaru.

Surprised by the Nine-Tails' chakra, Sasuke asks Naruto what he is. Naruto responds that he is a friend. Naruto attacks and Sasuke is unable to keep up with his speed. Naruto begins beating sense into him, causing Sasuke to yell that Naruto, never having had a family, can't understand what it's like to lose them. Naruto admits that this is true, but says he had come to think of Sasuke as a brother. Realising that Naruto regards him with a familial bond, Sasuke's Sharingan fully develops. He puts on his Konoha forehead protector and promises to sever their bond so that Naruto will no longer pursue him.

By putting on his Konoha forehead protector, Sasuke acknowledges Naruto as his equal, both being strong and both knowing what it is to be lonely. However, Sasuke claims that Naruto lacks the power to scratch the forehead protector, and that once he has killed Naruto he will become even stronger. Naruto attacks and Sasuke, his Sharingan having matured, is able to predict his movements and dodge his strikes. He attacks Naruto's openings and repels him. Within Naruto's subconscious, the Nine-Tails grants him more of its chakra, allowing Naruto to obtain the one-tailed form.

Seeing his one-tailed form, Sasuke finally understands why others find Naruto so interesting. Naruto lunges at him and, although Sasuke's Sharingan is able to predict Naruto's movements, it cannot predict the chakra shroud's actions. Sasuke tries to attack from a distance but the shroud not only protects Naruto, it also extends his physical range. Discovering that he is no match, Sasuke advances his cursed seal to its second level to prove his abilities are superior.

Although Naruto's one-tailed form and Sasuke's level two cursed seal form make them equal matches, the two power sources have negative effects on their respective bodies. Deciding it is time to put an end to the fight and their history together, the two prepare their final attacks. Naruto forms a Rasengan and Sasuke creates his Chidori. The two charge at each other and clash their techniques.

Naruto's Nine-Tails-fuelled Rasengan and Sasuke's cursed seal-powered Chidori creates a sphere of chakra around them. Within the sphere Sasuke punches Naruto and Naruto scratches Sasuke's forehead protector, doing what Sasuke claimed he could not. They stand together as the sphere dissipates and when it is gone Sasuke stands over an unconscious Naruto. Sasuke's forehead protector falls off and, as he starts coughing up blood, he looks down at Naruto. It starts to rain and Kakashi finally arrives, though he finds Naruto alone and defeated.

Kakashi regrets the way things have turned out and gathers up Naruto. Because of the rain he has lost Sasuke's trail, so he carries Naruto back to Konoha. Sasuke staggers towards Orochimaru, having decided not to kill Naruto. Although that would have given him strength in the form of the Mangekyō Sharingan, acquiring it would have been what Itachi wanted, which Sasuke is not willing to do. Kakashi marvels at the choice of location for Naruto and Sasuke's battle: the Valley of the End. Their battle being much like the one that formed the valley, Kakashi wonders if battles like this will continue forever. Meanwhile, an Akatsuki member emerges from the ground and comments on the battle.

Naruto wakes up as Kakashi carries him back to Konoha, allowing him to hear about the fates of the rest of the Sasuke Recovery Team. Tsunade is hard at work trying to save Chōji from the side-effects of the Three Coloured Pills. Kiba and Akamaru, though badly injured, are expected to make a complete recovery. A team of medical-nin is hard at work trying to regenerate Neji's wounds. Shikamaru, having only suffered a dislocated finger, is hit hardest by what happened to his team. He considers giving up on being a ninja, since he wasn't able to protect his friends. His father, Shikaku, points out that even if he quits his friends will continue to be put in dangerous situations, but when they are Shikamaru will not be able to help them. Tsunade informs them that all the members of the team will be fine and that Naruto has also been safely recovered. However, since Sasuke escaped, the mission was a failure. Elated that nobody died under his command, Shikamaru vows to not fail again. 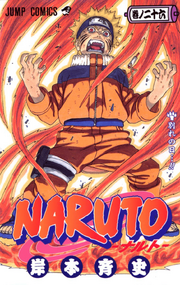