The Enigma that is Tobiedit

The Mystery of Tobi

"The Enigma that is Tobi" (トビの謎, Tobi no Nazo, Viz: The Mystery of Tobi) is chapter 395 of the original Naruto manga.

Shino surrounds Tobi with his kikaichū and encases him with them. As the kikaichū consume his chakra the other Konoha ninja prepare to capture him. Tobi then disappears. Team 7 and Team 8 try to come to grips with how someone can completely vanish without giving some indication of where they are going. Tobi alerts them to where he has relocated to. Before they can stage a second attack, Zetsu appears and informs Tobi that Sasuke has killed Itachi. Having expected this outcome, Tobi tells the Konoha ninja that his business with them is done, even letting them see his Sharingan. 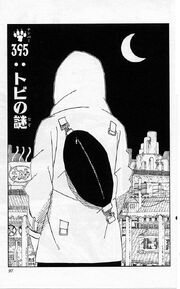