"The Final Rounds: Rush to the Battle Arena!"edit

Naruto goes to the entrance of the stadium where there's a banner announcing that the Chūnin Exams will be the next day. He eats at the Ramen Ichiraku, where Teuchi and Ayame gave him a big bowl of ramen on the house, since his match will be tomorrow. The previous Ino–Shika–Chō eat at a restaurant, with Inoichi being teased about the fact that he has a daughter. Chōza places an additional order, and then Shikamaru appears, telling his father they need to go home. Temari and Kankurō are preparing their weapons, while Gaara is sitting on the rooftop. Neji and Tenten are shown to be practising, as well as Shino. The next day, Naruto meets Hinata where Team 7 had their bell test. Hinata concludes that he may defeat Neji, adding that Naruto's words of encouragement during her match with Neji made her a better person. This prompts Naruto to say that he likes people like Hinata and invites her to watch his fight against Neji. Hearing fireworks, he rushes to the stadium so he could make it in time. On his way, he sees Konohamaru who tells Naruto that he knows the shortcut to the stadium, but Konohamaru just brings him to the other side of the village. He then tells Naruto to ride the daimyō's bulls to the stadium; Naruto kicks the bull, causing a stampede. Despite the trouble, Naruto finally arrives to the stadium, just in time for his match. 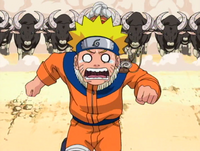