"The Final Seal" (最後の封印, Saigo no Fūin) is chapter 123 of the original Naruto manga.

The First Hokage and the Second Hokage attack Sarutobi's shadow clones, but the clones still manage to catch each of the former Hokage. The Dead Demon Consuming Seal grabs the Hokage's souls, breaking all of the jutsu in play and allowing them a brief return to their senses. Sarutobi apologises to both for what he is about to do and then seals away their souls with the move also revealing the dead bodies of Kin Tsuchi and Zaku Abumi, both of whom were used as sacrifices to summon the two Hokage. Angry that Orochimaru could make such casual use of others' lives, the real Sarutobi tries to do the same to him. Sensing what is happening, Orochimaru summons his Kusanagi back to him, which Enma tries to stop. 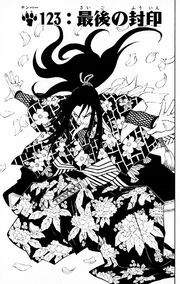