"Prepared for an Honourable Defeat…!!"

The Third Hokage greets the Fourth Kazekage, the two intending to watch the finals together. The finalists are informed of modifications to the match line-up, Dosu's death meaning that Shikamaru will fight Temari in his first match. Sasuke, similarly, has not arrived yet, and his absence will be dealt with when the time comes. Until then, Naruto and Neji prepare for their fight and the other finalists leave the arena. Hinata sits with Kiba to watch the match. Kiba notices that there are Anbu in the audience, and wonders what is happening. Naruto repeats his vow to defeat Neji, who scoffs at the very suggestion. 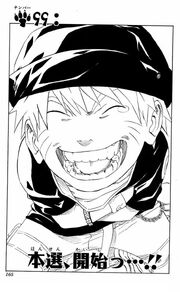