"Together with the Thunder…!!"

Itachi's Amaterasu overwhelms Sasuke's regular fire and goes on to ignite the area. Despite Sasuke's attempts to escape, Amaterasu strikes him as well. As his body is reduced to ashes Itachi reaches for his eyes. He finds that it is only a body double, Sasuke having used one of Orochimaru's techniques to escape damage. Sasuke depletes his chakra reserves with additional fire technique, but they miss Itachi. Although he is exhausted from use of his Mangekyō Sharingan, Itachi believes he has won. Sasuke corrects him, saying he has one more technique just as storm clouds gather. 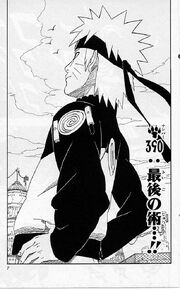