The Kage prepare for the Kage Summit, each leaving their respective villages with two bodyguards. Before Danzō sets out he issues orders for Kabuto's capture, wishing to use Kabuto's knowledge to repair his right arm and eye. In Konoha, Karui and Omoi interrogate Naruto about Sasuke but he cannot bring himself to say anything against his friend since killing him would not save Killer B and would just start a war driven by vengeance. Naruto offers to let Karui take out her anger on him, which she readily accepts and proceeds to punch Naruto repeatedly. Eventually Sai stops her, which Naruto is not happy with at the time, but thanks him later.

Before leaving for the Kage Summit with his bodyguards, Danzō arranges extra surveillance on Naruto, needing him to remain on Konoha and also believing Sai may betray him. As Naruto is elsewhere beaten up by Karui so that she can relieve her anger, Sai steps in and stops her, saying Sasuke is not worth the trouble either of them are going through. Sai tends to Naruto's wounds and takes him to Kakashi and Yamato. Naruto tells them about his meeting with the Fourth Hokage and the Fourth's allegations against Tobi. Fearing the influence Tobi is having on Sasuke, Naruto wants to speak with the Fourth Raikage and ask him to forgive Sasuke. Kakashi and Yamato agree. Elsewhere, Danzō and his bodyguards are attacked by several enemies. Wanting to deal with them on his own, Danzō reveals his Sharingan.

While Danzō is on his way to the Kage Summit he is attacked by ninja from the Land of Woods, remnants from a group he had had Root eliminate. He uses his Sharingan eye to detect them and uses his Wind Release technique to massacre them all. He then cites their actions as proof that the world needs his views on good and evil. In Konoha, Kakashi deals with the Root members following Naruto. Yamato plants a tracker on Team Samui as they leave the village, allowing him, Kakashi, and Naruto to follow them to the Fourth Raikage in the Land of Iron.

While on his way to the Kage Summit, Danzō receives an update from Sai. In Konoha, Sai thinks about Naruto and Sakura's relationship and how the promise Naruto made about Sasuke continues to hang over him. In the Land of Iron, Naruto meets with the Fourth Raikage. Despite him being forbidden to be anywhere near the Kage Summit, he pleads for the Raikage to forgive Sasuke for his crimes. The Raikage refuses and tells Naruto his actions are unbecoming of a shinobi since the Summit is about to seal Sasuke's status as a criminal. The Raikage leaves Naruto behind and continues on to the Kage Summit, unaware that Sasuke and the rest of Taka are watching the Kage arrive.

The Kage Summit begins. They first discuss previous attempts to collaborate against Akatsuki, an idea that most of the Kage rejected since each village still had a jinchūriki. The Fourth Raikage becomes angry about the casual nature of the meeting and smashes the table in front him, prompting the Kage's bodyguards to come to their defence. Once things have settled the Raikage accuses the other villages of supporting Akatsuki in the past. The Kage start to debate the merits of using Akatsuki, so Danzō gets things back on track by relaying Sai's report that Akatsuki is led by "Madara Uchiha". In Konoha, Sai speaks with Sakura about Naruto's attempts to ask the Raikage to pardon Sasuke. Since Naruto is doing all of this because of the promise he made to Sakura, Sai reasons that he both loves Sakura and is caused constant pain because of her. At the Summit, in light of Danzō's news, Mifune, the Summit's mediator, suggests the ninja villages unite against Akatsuki under Danzō's leadership.

At the Kage Summit, the Fourth Raikage protests Danzō's nomination. Mifune gives his arguments. Ao becomes suspicious and uses his Byakugan. In the Konoha, the members of Team 8, Team 10, and Team Guy decide that Sasuke's recent actions will only drag the village into a war. On behalf of the group, Shikamaru approaches Team 7 with plans to eliminate Sasuke before he can become more of a burden. This, combined with Sai's claims that making Sakura happy causes Naruto more pain than Sasuke does, causes Sakura to agree. Back at the Summit, thanks to his Byakugan, which comes from a defeated member of the Hyūga clan, Ao reveals that Danzō is using his Sharingan, which originally belonged to Shisui Uchiha, to manipulate Mifune. Before Danzō can be questioned about this, Zetsu, on Tobi's order, infiltrates the Summit and tells the Kage that Sasuke is nearby.

The Fourth Raikage questions Zetsu on Sasuke's exact location, then breaks his neck when he doesn't answer soon enough. The Raikage and his bodyguards go to deal with Sasuke, but not before instructing Ao to keep an eye on Danzō. The Land of Iron's samurai are also mobilised to find Sasuke. Meanwhile, Tobi confronts Naruto to ask about his recent encounter with Nagato. He is attacked by Kakashi and Yamato, so he offers to tell them about Sasuke. At the Summit, Sasuke kills the attacking samurai, indirectly alerting the Raikage to his location.

The Fourth Raikage and his bodyguards attack Sasuke and the rest of Taka. Since they are only barely able to evade the Kumogakure ninja's attacks, they consider running, since Taka cannot fight them and Danzō. Jūgo offers to deal with them. At the Kage Summit, Danzō admits to using his Sharingan to manipulate the meeting in his favour, what he thought would be the first step in bringing world peace under Konoha's rule. With Danzō now under the watchful eye of Ao, the other Kage consider joining the fight with Sasuke.

Jūgo, fully transformed and overcome by his murderous desires, fights the Fourth Raikage. He is quickly defeated, forcing Sasuke to step in. Elsewhere, Tobi tells Naruto, Kakashi, and Yamato about the truth behind the Uchiha clan's demise and how vengeance against Konoha now drives Sasuke's actions. Since Sasuke rejected Itachi's wish for him to live at peace with Konoha, Tobi argues that Sasuke is a true Uchiha; where the sons of the Sage of the Six Paths began the rivalry between Uchiha and Senju centuries ago, Sasuke continues that rivalry by seeking to destroy Konoha and, someday, Naruto. 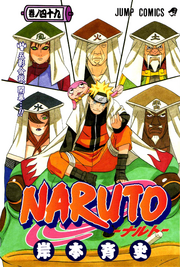