"A Conversation Between Men!!"

Sasuke remains despite Jūgo's pleas for him to leave. He explains that only Kimimaro was able to keep his thirst for blood under control. Since Kimimaro is dead, he can no longer go outside. Sasuke reveals that Kimimaro died for him which Jūgo, remembering his last conversation with Kimimaro, concludes to mean that Kimimaro lives on within Sasuke. He agrees to join them. His team assembled, Sasuke names them Hebi and gives them the task of finding and killing Itachi. In Konoha, Naruto realises that this is Sasuke's goal, so decides to find Itachi in order to find Sasuke. 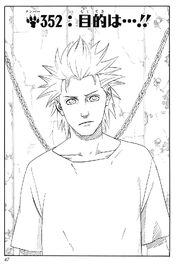