The Great War Breaks Out! (volume)

The Great War Breaks Out! (大戦、開戦!, Taisen, Kaisen!) is volume 55 of the Naruto manga.

Ōnoki escorts the Island Turtle to Kumogakure. Killer B begins teaching Naruto how to control tailed beast's chakra. Sasuke wonders if its okay to take the bandages off his eyes, but Zetsu says it isn't and that he should be more patient. The Allied Shinobi Forces discover the amount of troops Akatsuki's army has, and they begin formulating counter-measures. Kabuto reveals the rest of his reincarnated servants and he and Tobi along with the Zetsu army begin the march to war.

After discovering that Akatsuki's forces are moving out, Anko orders her team to return to headquarters, while she searches the enemy base. Kabuto's reincarnated servants discuss the reasoning for their reincarnation. Kabuto forms a Surprise Attack and Diversion Platoon using four of his servants. Afterwards, Kabuto confronts Anko and engages her in battle. Naruto moves on to the next step of his training. Gaara gives an inspiring speech to the shinobi army, which stops the fighting between the troops. Afterwards, the army heads out for war, and the Kage all agree that they will win.

The Surprise Attack Division moves into enemy territory, and Omoi worries about what will happen if he is captured. The allied forces evacuate the lands of Hot Water, and Frost. Anko is defeated by Kabuto. Akatsuki's Surprise Attack and Diversion Platoon engages in battle with the Allied Shinobi Forces Surprise Attack Division. Sai realises that his "brother" has been reincarnated to fight for Akatsuki. Omoi raises his sword, and says that he won't allow the enemy to force friends and family to fight.

Omoi frees the ninja under Sasori's control. Ittan and Kiri get the wounded to safety and heal them. Sai, Omoi, and Kankurō battle the Akatsuki team. Kankurō and Omoi succeed in capturing Sasori and Deidara. Shin, after seeing Sai's completed drawing, has his soul freed.

After hearing Kankurō's speech, Sasori's body begins to crumble. Before returning in the afterlife, Sasori entrusts Kankurō with his puppets "Mother and Father", and tells him to pass them on to the next generation. After discussing a potential weakness in the Summoning: Impure World Reincarnation, the team prepares for their ambush. Kabuto tells Tobi to go ahead to the front lines, while he stays hidden, and focuses on his technique. Naruto begins to learn a new technique.

"The Secret of the Impure World Reincarnation" (穢土転生の秘密, Edo Tensei no Himitsu)

Naruto continues to practice making the Tailed Beast Rasengan. Tobi orders Kabuto to kill Anko, but he says he can get stronger by absorbing the remnants of Orochimaru's chakra that is in her, so instead, he has Kabuto show him how Summoning: Impure World Reincarnation works, by having him use Fū Yamanaka to reincarnate Torune, whom he just killed. Kabuto does so. The Allied Forces learn of the White Zetsu Army moving underground. The Surprise Attack Division continues their assault.

Kabuto erases the personalities of Zabuza, Haku, Pakura, and Gari. They begin to battle with the Third Division. Suigetsu and Jūgo escape from their imprisonment within the Land of Iron, due to weakened security caused by the mobilisation of forces for the war. The previous Seven Ninja Swordsmen of the Mist are summoned to the battlefield as backup.

The Third Division battles the Seven Ninja Swordsmen of the Mist. While searching for his sword, Suigetsu explains why he wants to obtain the seven swordsmen's weapons, and explains their abilities. Kakashi nearly hits Zabuza, but is stopped, and held by Haku. Zabuza prepares to cut through both Haku and Kakashi.

Kakashi narrowly avoids Zabuza's attack. Zabuza and Haku are captured and restrained. Kitsuchi is informed of thousands of more Zetsu travelling underneath them. Mū, the Second Tsuchikage, is discovered by Gaara with his sand. 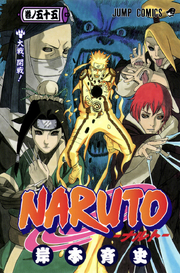