In his anger, Naruto unknowingly taps into the chakra reserves of the Nine-Tails. Kakashi senses this and, worried that the seal that keeps the fox sealed within Naruto has been broken, decides it is time to finish his battle with Zabuza. When he sees that Naruto's mysterious chakra source also heals all the damage he has sustained, Haku tries to flee. In one quick motion, Naruto avoids one of Haku's attacks and catches Haku. He then punches Haku in the face, sending him flying and shattering his ice prison. Naruto charges to deliver the finishing blow, and Haku turns to face his death, revealing that the mask he has been wearing in the entire battle has been broken.

Seeing Haku's face for the first time and recognising him as the boy he met a few days earlier, Naruto stops himself from killing Haku. Assuming that he is being shown mercy, Haku reminds Naruto that he killed Sasuke. He goes on to add that sparing his life is rude since his life no longer has meaning because he has lost to Naruto and, in turn, lost his usefulness to Zabuza. Because Zabuza is the only person to have enter found value in Haku's existence, Haku swore to live his life as Zabuza's tool. Meanwhile, Kakashi takes advantage of the damages he has received so far. Knowing that Zabuza is covered in his blood, Kakashi summons a pack of ninken to follow his own scent and restrain Zabuza.

With Zabuza immobilised, Kakashi prepares his Lightning Cutter so that he can finally put an end to Zabuza's schemes. Elsewhere, Haku asks Naruto to kill him. Believing that death is the only way Haku will find happiness, Naruto charges at him just as Kakashi charges at Zabuza. Sensing his master's danger, Haku blocks Naruto's attack and disappears. Using himself as a human shield, Haku takes the full force of the Lightning Cutter, at the same time releasing Zabuza from the ninken. With the last of his strength, Haku grabs Kakashi to prevent him from escaping.

Haku, dead, is holding Kakashi in place. Naruto, having gone looking for Haku after his sudden disappearance, finds him in this position just as Zabuza is about to slice through his body to get to Kakashi. Kakashi avoids the attack and protects Haku's body before staging a counter assault. Sakura, seeing that Naruto is okay, asks about Sasuke. When Naruto doesn't respond, she suspects the worst. Because she cannot leave Tazuna's side, she asks that he accompany her to Sasuke's body.

Kakashi destroys Zabuza's arms, preventing him from attacking further. Seeing that Zabuza will no longer be able to assassinate Tazuna, Gatō appears with a group of thugs to finish the job himself. Noticing Haku's body and remembering when Haku broke his arm, Gatō defiles his corpse. Although this makes Naruto mad, he is even angrier about the fact that Zabuza does not seem to care. Zabuza reminds him that both he and Haku were ninja: tools of battle. They have no emotions or attachments. Naruto explains that this was not true of Haku as he cared deeply for Zabuza. Knowing that Naruto is right, Zabuza cries for never appreciating Haku. Hoping to repent, Zabuza takes a kunai with his mouth and charges through the thugs to reach Gatō. He decapitates Gatō and that collapses from the combined attacks of Gatō's forces.

Sasuke wakes up, having only been put into a deathlike state by Haku. Sakura tells Naruto the good news, who is glad that Haku was able to stay true to his desire to not kill anybody. With Gatō dead, his thugs consider pillaging the Land of Waves to replace the paycheck they will not be getting. Just then, Inari, along with the villagers appears to finally protect their country. After Naruto and Kakashi contribute some of their own shadow clones, the thugs are scared off and went running way. As Zabuza's life fades, he asks Kakashi to take him to Haku's body as a request. As he dies, Zabuza regrets that he will not be able to join his most loyal follower. The two are then buried beside each other on a high land overlooking the country, and when Tazuna completes the bridge two weeks later, Team 7 goes home to Konoha.

After Team 7 returns from a mission, Kakashi is summoned away. Naruto tries to spend time with Sakura and Sakura tries to spend time with Sasuke, but both are unsuccessful. Although disappointed, Naruto notices that he is being followed. He forces Konohamaru to reveal himself, and Konohamaru congratulates Naruto's detection skills, unaware that he was doing a terrible job of staying hidden. Seeing Sakura, who is moping from being turned down by Sasuke, Konohamaru assumes that she is Naruto's girlfriend. She tries to attack him for this mistake and, while fleeing, Konohamaru runs into two foreigners. Elsewhere, the Third Hokage informs Kakashi and Konoha's other jōnin that the Chūnin Exams are about to begin.

Irritated that Konohamaru had run into him, Kankurō tries to beat him up. He is stopped by Sasuke. Elsewhere, Konoha's jōnin enter the members of Team 7, Team 8, and Team 10 into the Chūnin Exams against Iruka Umino's objections. Recognising that Sasuke may pose a challenge, Kankurō prepares to fight him but is stopped by Gaara. Sakura asks why three Sunagakure ninja are in Konoha. They explain that the Chūnin Exams are an opportunity to advance in rank before departing, leaving the members of Team 7 intrigued. Another team watches from a tree nearby.

Kakashi informs Team 7 that they have the opportunity to enter the Chūnin Exams. He gives any and all of them the choice not to participate before leaving. Although Naruto and Sasuke are enthusiastic, Sakura is worried that she will not be able to keep up with the other competitors. Nevertheless, Team 7 heads to the sign-up location together the next day and finds the members of Team Guy being bullied by two genin. Recognising that things are not as they seem, Sasuke begins to fight one of the genin but they are stopped by Rock Lee, a member of Team Guy who had only moments earlier appeared defenceless. Lee asks Sakura to be his girlfriend, but she turns him down before leaving. The two genin, actually chūnin in disguise, remark that this exam's competitors seem promising. Lee follows Team 7 to challenge Sasuke. 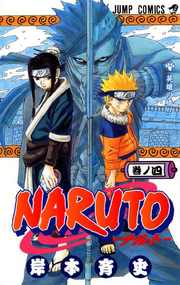