"The Hyūga Clan" (日向一族, Hyūga Ichizoku) is chapter 79 of the original Naruto manga.

Inspired by Naruto's confidence in her, Hinata sheds the fears she had had only moments earlier. While Neji is surprised by Hinata's newfound determination, he maintains that Hinata will lose. The two Hyūga begin trading Gentle Fist-style blows, a form of combat that causes internal injuries. Hinata is able to block some of Neji's attacks and land a couple of attacks herself. However, Neji reveals that since the beginning of their fight he has been cutting off Hinata's chakra points, making her attacks ineffective. Despite this, Hinata refuses to give up. 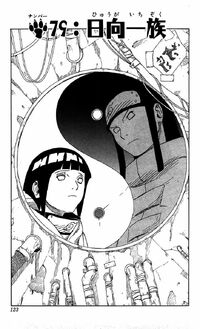