"The Inherited Will!!" (受け継がれゆく意志!!, Uketsugare Yuku Ishi!!, Viz: The Bestowed Will!!) is chapter 122 of the original Naruto manga.

Orochimaru restores his original face so that Hiruzen can continue to fight his former protege. The First Hokage and the Second Hokage attack again, and Sarutobi once more reflects on the last time he saw Orochimaru. After being caught committing an unforgivable crime, Orochimaru gave Hiruzen the chance to kill him but he hesitated and Orochimaru fled, allowing him to at long last carry out his dream of achieving "greatness". Hoping to repent for this mistake, Hiruzen creates two shadow clones and then performs the Dead Demon Consuming Seal. 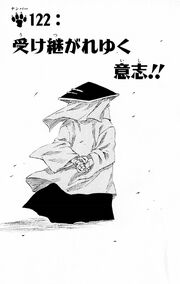