"The First Time I Spoke With You"

As Naruto starts getting frustrated with his lack of progress, Sasuke's cursed seal finally reaches its second level, allowing him to exit his coffin. Sasuke's appearance snaps Naruto out of his Nine-Tails mood and he encourages Sasuke to return home with him, stating that everyone is waiting for him in Konoha. Sasuke does not comply or respond, instead cackling rather madly which leaves Naruto enraged. Sasuke leaves the enclosure with Naruto attempting to follow, although Kimimaro prevents Naruto from going after Sasuke, intending to kill Naruto. Luckily, the arrival of the newly recovered Rock Lee blocks Kimimaro's attack and saves Naruto. Lee tells Naruto to go after Sasuke, reminding him of his promise to Sakura. Lee and Kimimaro begin exchanging blows, though Kimimaro's unique control over his bones makes things difficult for Lee. On top of that, Kimimaro finds Lee's moves to be predictable. Soon after the fight begins, Lee asks for a timeout so that he can take his medicine. Kimimaro lets him, and Lee drinks the contents of his medicine bottle.

Back in Konoha, Guy returns from his mission and rushes to the hospital to ask Tsunade how Lee's operation went. Tsunade tells him it was a success and that Lee could begin training as early as tomorrow, only for two aides to rush in and claim that Lee is missing. Tsunade realises that Lee must have gone after the Sasuke Recovery Team in order to help out. She also realises that Lee took a bottle of sake instead of his medicine, which causes Guy to freak out. Guy explains that even a sip of alcohol turns Lee extremely inebriated, and reveals that when he is not sober, Lee can be very dangerous and devastating, since he is a natural master at the art of the Drunken Fist. Back at the clearing, Lee drinks the sake and becomes inebriated. He assumes the Drunken Fist stance as he prepares to take on Kimimaro. 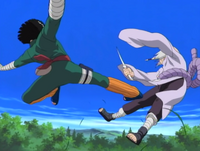