"Thing You Should Protect"

The Third Division battles the Seven Ninja Swordsmen of the Mist. While searching for his sword, Suigetsu explains why he wants to obtain the seven swordsmen's weapons, and explains their abilities. Kakashi nearly hits Zabuza, but is stopped, and held by Haku. Zabuza prepares to cut through both Haku and Kakashi. 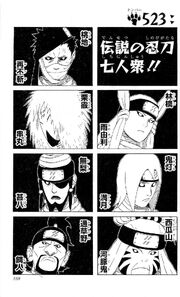