The Naruto Shinobi Handbook!! (ナルト忍法帖!!, Naruto Ninpōchō!!) is volume 15 of the Naruto manga.

Gaara, partially transformed, attacks Sasuke, and Sasuke has difficulty dodging. He thinks back to an earlier encounter with Gaara wherein Gaara explained his interest in killing in Sasuke. Gaara recognises that Sasuke has known true loss and loneliness, and now seeks strength. As these are also traits Gaara possesses, Gaara believes they are the same. By killing Sasuke, Gaara would prove himself superior and thus feel truly alive. Intending not to give Gaara what he wants, and to make sure he will be able to kill his brother Itachi, Sasuke attacks Gaara with Chidori.

The pain caused by Chidori only increases Gaara's interest in the battle. After advancing his transformation further he attacks Sasuke again, this time even faster than before. Knowing Chidori is the only way to damage Gaara, Sasuke remembers what Kakashi told him about the technique: that his limit is two uses per day and, if he tried to exceed that, he would die. Having already used Chidori twice and knowing he will die anyway if he doesn't try, Sasuke uses a third Chidori, activating the cursed seal to give him the needed strength. While the attack succeeds, Sasuke is unable to move afterwards. Gaara quickly recovers and moves to finish Sasuke, but is stopped by Naruto.

Naruto has difficulty recognising Gaara in his transformed state. When Pakkun tells him who it is, Naruto remembers Gaara's claim that he is a monster and realises he wasn't exaggerating. Naruto suggests running, but Gaara takes his preoccupation to try and kill Sasuke. Sakura shields him, but Gaara immobilises her. Tormented about her selfless act, Gaara reflects on his childhood. When Gaara was a child in Sunagakure he only wanted friends. His peers feared him for being the host of Shukaku and ran when he was nearby, and he would accidentally attack them while trying to stop them. Sympathising with them, Gaara wondered what it was to feel pain.

Ignorant of pain because of Shukaku's protection, Gaara asked his uncle, Yashamaru, about it. Yashamaru tried to put the sensation to words, after which Gaara came to believe he felt pain in his heart. Trying to explain the difference between physical and emotional pain, Yashamaru told him that emotional pain could only be cured with love. Yashamaru added that both he and Gaara's mother, who gave her life to seal Shukaku within him, loved him. Excited, Gaara tried to find new sources of love to make his pain go away, but found none, not even from his father. While ruing his fate one night Gaara was attacked. He easily dealt with his attacker, only to discover afterwards that it was Yashamaru.

Gaara apologised to Yashamaru for harming him, explaining that he didn't know who it was. He tried to rationalise Yashamaru's attack as an order of the Fourth Kazekage, but Yashamaru assured him that he had volunteered for the job. Despite his best efforts, Yashamaru had never been able to love Gaara, Gaara's existence coming at the cost of his sister's life, Gaara's mother. Since she didn't love Gaara either, Yashamaru tried to end Gaara's life by blowing himself up. Gaara survived and came to find love in proving his existence by killing others. Now intending to kill Naruto and his friends, Gaara attacks them. Naruto tries to summon Gamabunta to help him, but can only manage to summon Gamakichi.

"The Two… Darkness and Light" (二人…闇と光, Futari… Yami to Hikari)

To make sure that Naruto stays committed to the battle, Gaara begins to slowly suffocate Sakura, explaining that she will only be released if he is defeated. He then attacks Naruto, who protects Gamakichi from harm. Gaara's transformation continues to progress and Naruto realises that he might have turned out just like Gaara if he hadn't met Iruka and Team 7. Although he wonders if he can really defeat someone driven by so much hate, Naruto attacks, knowing that under no circumstances can he allow himself to lose.

With a newfound resolve to win, Naruto attacks Gaara with a group of shadow clones. He lands a lucky blow, damaging Gaara's defenceless underside, but this only gives Gaara a greater interest in killing him. Sasuke steps in, telling Naruto to free Sakura from Gaara's prison and flee. Having lost his entire family, Sasuke will not allow his teammates to die too, they being the only precious things he has left. Remembering Haku's words that strength can be gained when protecting others, Naruto refuses to run, instead creating a thousand shadow clones to properly start round two.

As Naruto and his thousand shadow clones attack a vulnerable Gaara, all of the onlookers are completely surprised. As a last resort, Gaara completely transforms into Shukaku and tries to crush Naruto with his sand. Still refusing to lose, Naruto uses the Nine-Tails' chakra to summon Gamabunta to escape. Seeing Shukaku, Gamabunta has no interest in fighting, especially since Naruto has yet to earn his trust. Gamakichi, Gamabunta's son, assures his father that Naruto is a good person since he protected him from Gaara. Enraged that anyone would attack a member of his family, Gamabunta agrees to help.

Gamabunta attacks Gaara in his full-Shukaku transformation. Fascinated by Naruto's ability to summon Gamabunta, Gaara puts himself to sleep to bring out Shukaku's personality, giving it control of the Shukaku-likeness. Elated to have been released, Shukaku attacks, and Gamabunta has difficulty dodging. Knowing they cannot win a long-range battle, Gamabunta asks Naruto to transform him into another creature better-equipped for close combat. Naruto turns him into a fox, which attacks Shukaku. As the two giants clash, Naruto leaps from Gamabunta to attack Gaara, intending to wake him up. 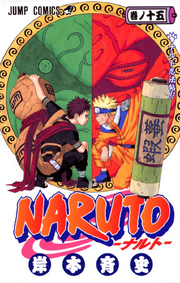