A Suspension Bridge to Peace (#54)

Naruto Uzumaki completes his training of gaining the Nine-Tails' chakra inside of him. Before Yamato, Naruto, and Killer B leave, Naruto senses Kisame Hoshigaki inside Samehada. Samehada springs into action but Naruto used his right hand to smash Kisame. Meanwhile, Might Guy arrives to the Falls of Truth. He starts to go into the Falls to confront his true self. His true self starts to appear behind the waterfall and ask Guy why he keeps on talking about the power of youth. Guy is furious and demands that his true self confront him. The true self is about to appear when Kisame bursts through the waterfall. In thinking that the "bizarre bug" who is Kisame is his true self, Guy proceeds to fight him. 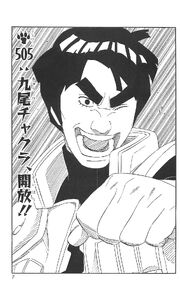