The One Who Knows the Truth (真実を知る者, Shinjitsu o Shiru Mono) is volume 43 of the Naruto manga.

Itachi's Amaterasu overwhelms Sasuke's regular fire and goes on to ignite the area. Despite Sasuke's attempts to escape, Amaterasu strikes him as well. As his body is reduced to ashes Itachi reaches for his eyes. He finds that it is only a body double, Sasuke having used one of Orochimaru's techniques to escape damage. Sasuke depletes his chakra reserves with additional fire technique, but they miss Itachi. Although he is exhausted from use of his Mangekyō Sharingan, Itachi believes he has won. Sasuke corrects him, saying he has one more technique just as storm clouds gather.

As a storm begins to brew. Zetsu realises that Sasuke has taken advantage of his own fire technique and Itachi's Amaterasu to create perfect conditions for lightning. By controlling the natural lightning, Sasuke gains a devastating and unavoidable technique: Kirin. Itachi is struck and the surrounding area is destroyed. After the clouds dissipate Sasuke believes he has won. Itachi corrects him. Angry that his final attack has failed, Sasuke activates level two of his cursed seal. Itachi assures him that Kirin was a powerful attack and that he would have been dead if it wasn't for his Susanoo.

Itachi reveals Susanoo, the last of the techniques granted to him by his Mangekyō Sharingan. It surrounds Itachi and protects him from all damage. Seeing this, Orochimaru offers to help Sasuke defeat Itachi. Orochimaru's Eight Branches Technique erupts from Sasuke's body and attacks Itachi. Susanoo cuts off the serpent's heads, prompting Orochimaru to reveal himself. He thanks Itachi for pushing Sasuke to his limits and thus allowing him to escape. He prepares to take Sasuke's body, but is struck by Susanoo. As a special property of Susanoo's sword, Orochimaru is sealed away, removing him and his cursed seal from Sasuke's body.

With Orochimaru gone, Sasuke is out of options. Itachi approaches Sasuke to take his eyes, and Sasuke makes futile attempts to keep him away. As Itachi draws nearer his Susanoo begins to disappear and he starts to cough up blood. This does not prevent him from cornering Sasuke. He reaches for Sasuke's eyes and mutters something, but only makes it as far as poking Sasuke's forehead before collapsing.

Itachi's Amaterasu continues to burn the area. After a few speechless moments of watching, Zetsu realises Itachi truly has died despite almost succeeding in taking Sasuke's eyes. His right half declares this to be Sasuke's victory, yet his left half is still confused. He notes that the fight was unusual, as Itachi's movements were sluggish nor was he fighting at his true strength. His right half agrees, as Itachi could not evade nor counterattacks that he should have been able to handle, and he was coughing up blood. The right half suggests that he may have been seriously weakened before the battle began. Zetsu is unsure if it was due to using the Sharingan too much. They then leave, seeing how they can't draw any conclusions, with the left half mentioning how Itachi was so close to getting his brother's eyes too. Sasuke has finally calmed down. Realising that he's safe, he smiles for finally killing his brother before he collapses from exhaustion. Elsewhere, the Konoha ninja pursuing Sasuke rule out all possible explanations for why Tobi is not being damaged by their attacks. Opting to capture instead of damage him, Shino prepares his kikaichū for battle.

"The Enigma that is Tobi" (トビの謎, Tobi no Nazo)

Shino surrounds Tobi with his kikaichū and encases him with them. As the kikaichū consume his chakra the other Konoha ninja prepare to capture him. Tobi then disappears. Team 7 and Team 8 try to come to grips with how someone can completely vanish without giving some indication of where they are going. Tobi alerts them to where he has relocated to. Before they can stage a second attack, Zetsu appears and informs Tobi that Sasuke has killed Itachi. Having expected this outcome, Tobi tells the Konoha ninja that his business with them is done, even letting them see his Sharingan.

Tobi and Zetsu disappear. The Konoha ninja locate the site of Sasuke's fight with Itachi and try to reach it first. They bypass Itachi's lingering Amaterasu flames and prepare for another possible encounter with Tobi, only to find they are too late, as Sasuke and Itachi's body are gone. Unable to find a trail, they realise their pursuit has failed. Later, Sasuke wakes up in a cave. He is greeted by Tobi, who tended to his injuries after his fight with Itachi. He offers to tell Sasuke everything he doesn't know about Itachi, but Sasuke does not respond. Deciding to start with introductions, Tobi removes his mask slightly to show his Sharingan.

"The One Who Knows the Truth" (真実を知る者, Shinjitsu o Shiru Mono)

On seeing Tobi's Sharingan, Sasuke's left eye takes the form of Itachi's Mangekyō Sharingan and casts Amaterasu. Tobi, caught in the flames, loses hold of his mask and falls into the shadows. Sasuke wonders what just happened. A few moments later, Tobi returns, and explains that Itachi implanted his Amaterasu into Sasuke right before he died. Sasuke remembers the moment when Itachi tapped his forehead, but asks why he would do this. Tobi tells Sasuke that it was done to protect him. Sasuke becomes angered on hearing this, but Tobi tells him that there are many things he does not know about Itachi. Tobi, revealing himself as Madara Uchiha, offers to tell him about Itachi's life. Sasuke refuses to listen, but Tobi insists, claiming it's his duty to learn the truth.

"The Origin of Konoha" (木ノ葉のはじまり, Konoha no Hajimari)

Sasuke doesn't want to hear Tobi's "truth" about Itachi, but Tobi insists, saying that there are too few people who know what Itachi has actually done. As this is what Itachi wanted, he attempted to kill Tobi to make sure Sasuke would never find out about the motivations that drove him to do what he did. Sasuke cannot fathom that Itachi would do anything for his benefit and passes out. When he regains consciousness, Tobi starts over. Itachi did kill the Uchiha clan, but he did so under orders from Konoha. This being only the most recent chapter in the Uchiha's history, Tobi begins by touching upon the pre-Konoha era and Madara's own relationship with the future First Hokage.

"The Beginning of Everything!!" (すべての始まり!!, Subete no Hajimari!!)

In the era before the creation of the ninja villages, the Uchiha clan was in constant competition with the Senju clan, earning renown for both clans across the entire world. Remembering what Itachi told him, Sasuke asks if fame and power were Madara's reasons for taking his younger brother's eyes. Tobi confirms, but says that his brother willingly gave up his eyes in order to preserve the Uchiha's future. For this reason Madara did not want to accept the Senju's eventual offers of peace, but was forced to by the rest of his clan. Konoha was created and the title of Hokage was given to Hashirama Senju, not Madara. Fearing that the Senju would ruin the Uchiha, Madara tried to take control of Konoha. He failed and was believed to have died, but the Uchiha were thereafter regarded with suspicion in Konoha. When the Nine-Tailed Demon Fox attacked Konoha sixteen years earlier, Konoha suspected an Uchiha's involvement. Sick of not being trusted, the Uchiha began plotting to overthrow Konoha, beginning Itachi's tragedy.

When the Uchiha clan began plotting to take control of Konoha, Itachi was tasked to spy on Konoha's leadership for the Uchiha. Having witnessed countless deaths in his childhood and knowing that a coup d'état would cause more death, Itachi instead spied on the Uchiha for Konoha. When it became clear that war could not be avoided, Itachi was ordered to wipe out his own family. Choosing the lesser of two evils, Itachi sought out Tobi's help with the Uchiha's assassination, an opportunity for him to get revenge on the Uchiha for abandoning him decades earlier. Itachi killed the entire clan, but could not bring himself to kill Sasuke too. He asked Konoha to keep Sasuke safe and gave Sasuke the goal of killing him to make up for what he had done.

Sasuke tries to refute Tobi's story. He points out that Itachi tried to take his eyes and kill him, but Tobi responds that it was only to draw out Orochimaru and remove his influence from Sasuke. He instead pins blame on Tobi for the Nine-Tailed Demon Fox's attack, thereby causing the Uchiha's demise. Tobi claims he was not involved and that the fox's attack was a freak accident. Sasuke switches back to Itachi's actions, the actions of a criminal. The only proof that Tobi can provide for Itachi's good intentions is that Sasuke is still alive. Accepting that Itachi orchestrated his own death, prolonging his life in the face of a fatal illness to make sure he could be killed by Sasuke, Sasuke reminisces about his brother.

Sasuke remembers his childhood with Itachi, who was a loving older brother. Sasuke idolised Itachi's talent and pleaded for Itachi to teach him something, but Itachi would always refuse by poking him on the head and promising to do so some other time. Thinking about his most recent encounter with Itachi, before Itachi died, Sasuke remembers Itachi's final action. Rather than take Sasuke's eyes, Itachi poked him on the head and apologised for no longer being able to fulfil the promise of "some other time". Accepting that his brother was a good person, Sasuke, Mangekyō Sharingan active, informs Hebi, now renamed Taka, that their new mission is to destroy Konoha. 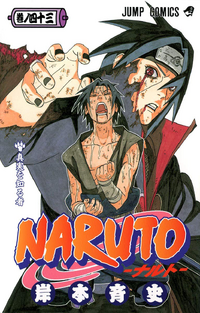