The Path That Should Be Followed…!!edit

The Path You Should Tread…!!

"The Path That Should Be Followed…!!" (進むべき道…!!, Susumubeki Michi…!!, Viz: The Path You Should Tread…!!) is chapter 61 of the original Naruto manga.

Because they needed another scroll, and because Kabuto was alone, Sasuke believes that defeating him would be their best chance to finish the second phase. Since Sasuke paid him a courtesy by explaining this instead of outright attacking him, Kabuto offers an alternative. He explains that other teams that are just now finishing are heading for the building in the centre of the Forest of Death with a false sense of security and tired after four days in the forest. Thus, if Sasuke and his team waits near the building, they may be able to take a scroll from one of the opposing teams. Kabuto then accompanies them to the building but finds that they are trapped in a genjutsu, victims of another team with the same idea. 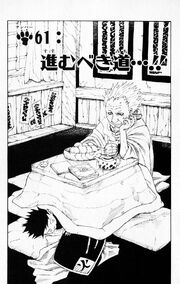