The People Starting to Moveedit

"The People Starting to Move" (動き出す者たち, Ugokidasu Mono-Tachi, Viz: On the Move) is chapter 354 of the original Naruto manga.

Believing that Team 7 would not be enough to locate and apprehend Itachi by themselves, Kakashi also recruits Team 8 to help them. Meanwhile, Hebi visits Sora-ku to stock up on supplies before going after Itachi. Elsewhere, Akatsuki completes its sealing of the Four-Tails. Deidara, wishing to get revenge against Team 7 because of their previous encounter and Sasuke for killing Orochimaru before he could, tells Tobi that they will be going after one of them. 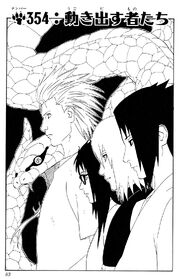