Naruto and Sakura are summoned to Tsunade's office where they are informed that Sasuke has killed Orochimaru. Meanwhile, Sasuke arrives at the base where Jūgo is held and finds a horde of escaped prisoners, many of which have cursed seals. He and Suigetsu defeat them all and enter the base. They locate and unlock Jūgo's holding cell and Jūgo attacks them as soon as the door opens.

Sasuke activates his cursed seal to shield himself from Jūgo's attack. Jūgo is elated to find someone with such good control of a cursed seal, but Suigetsu engages Jūgo in battle instead. They start fighting, but Sasuke stops them with his killing intent. Jūgo's murderous desires recede and he retreats back into his cell, asking them to leave since he doesn't want to kill anyone.

Sasuke remains despite Jūgo's pleas for him to leave. He explains that only Kimimaro was able to keep his thirst for blood under control. Since Kimimaro is dead, he can no longer go outside. Sasuke reveals that Kimimaro died for him which Jūgo, remembering his last conversation with Kimimaro, concludes to mean that Kimimaro lives on within Sasuke. He agrees to join them. His team assembled, Sasuke names them Hebi and gives them the task of finding and killing Itachi. In Konoha, Naruto realises that this is Sasuke's goal, so decides to find Itachi in order to find Sasuke.

Itachi and Kisame discuss Akatsuki's progress with capturing the tailed beasts. Kisame, having just caught the Four-Tails, offers to catch the Nine-Tails for Itachi, but Itachi points out that there is no rush since the Nine-Tails must be captured last. They are called to an Akatsuki meeting where they learn of Hidan and Kakuzu's death as well as Orochimaru's defeat by Sasuke. The Akatsuki leader warns Itachi that Sasuke will be coming after him, citing the skills of Sasuke's new teammates.

Believing that Team 7 would not be enough to locate and apprehend Itachi by themselves, Kakashi also recruits Team 8 to help them. Meanwhile, Hebi visits Sora-ku to stock up on supplies before going after Itachi. Elsewhere, Akatsuki completes its sealing of the Four-Tails. Deidara, wishing to get revenge against Team 7 because of their previous encounter and Sasuke for killing Orochimaru before he could, tells Tobi that they will be going after one of them.

The task force of Team 7 and Team 8 split up, some of Kakashi's ninken being added to each group. They break apart to begin searching for clues about Itachi's whereabouts. Hebi also splits up, searching known Akatsuki locations. Deidara, use of his arms restored from his previous encounter with Team 7, and Tobi go looking for Naruto or Sasuke. Someone locates Sasuke, and someone else locates Naruto's group.

Naruto and Sasuke notice that they are being followed. Sasuke is confronted by Tobi, who distracts Sasuke while Deidara attacks him. Naruto is greeted by Kabuto, who gives him a black book with information regarding the Akatsuki. When asked why, Kabuto says it is to thank Naruto for being an "inspiration". When asked why, Kabuto describes how Naruto has always struggled to distinguish himself from the Nine-Tails sealed within him, just as Kabuto always struggled to find autonomy from service to others. Following Naruto's example, Kabuto has opted to become strong enough to never need to serve someone again by integrating Orochimaru's remains into his body, thus making half of him Orochimaru.

Kabuto reveals that Orochimaru's remains constantly try to gain control of his body, a struggle that only makes him stronger. He flees before Naruto and his escorts can capture him, saying he will gladly fight Naruto after he has avenged Orochimaru by killing Sasuke. Meanwhile, Sasuke attacks Deidara and Tobi. Although he strikes Tobi, the attack has no effect. Deidara counters with his clay explosives, but Sasuke deflects them with his Chidori Senbon. Deidara decides to give his C2 a try.

Deidara's C2 dragon creates a number of smaller explosives before attacking Sasuke. Sasuke tries to destroy the dragon, but it flies out his reach and attacks from afar, forcing him to activate level two of his cursed seal. Tobi reports that he has buried the smaller explosives in the ground beneath Sasuke, meaning Sasuke will need to remain where he is or risk blowing up. Believing Sasuke is trapped, Deidara moves in to finish him off. Sasuke takes this opportunity to cut off the dragon's wing, causing it to fall to the ground and trigger the mine field.

Sasuke and Deidara separately escape the mine field's detonation. Seeing Sasuke's Sharingan, Deidara remembers of how he was recruited into the Akatsuki; Itachi used his Sharingan to turn Deidara's own explosives against him, humiliating him on the process. Determined not to lose to the Sharingan again, Deidara tells Tobi to run away as he intends to use his C4 explosive. 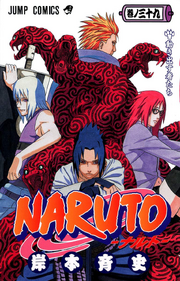