"The Shinobi of Konohagakure…!!"

After taking the first of the Three Coloured Pills, Chōji is able to match Jirōbō in physical strength. They exchange blows, but Chōji quickly begins to feel the strain of taking the pill. As they leave the area the Sasuke Recovery Team wonders if Chōji can defeat Jirōbō, but Shikamaru informs them that one-on-one battles are perhaps the best they can hope for and that Chōji, who considers himself as the weakest of the team, is doing his part now. Shikamaru adds that he is wrong to think so, as Chōji is actually the strongest. Jirōbō activates the first stage of his cursed seal to overpower Chōji and observes that he has been abandoned by the rest of his team. Determined to prove Jirōbō wrong and to avoid disappointing Shikamaru, Chōji takes the second pill, the yellow Curry Pill (カレー丸, Karēgan), to increase his size to gigantic proportions. 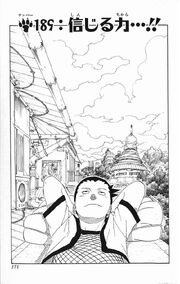