Word reaches Konoha of Gaara's rescue. Shizune asks Tsunade if it was a good idea to knowingly send Naruto into battle with Akatsuki, but Tsunade responds that only Naruto, a jinchūriki, can relate to Gaara. In Sunagakure, Team 7 attends Chiyo's funeral and prepares to leave with Team Guy. They say goodbye to the Three Sand Siblings and Naruto silently shakes hands with Gaara. Since Kakashi is unable to move from overuse of his Mangekyō Sharingan, Guy decides to carry him back to Konoha, a fact that disturbs the members of Teams 7 and Guy. Elsewhere, Tobi finds Deidara's ring, still attached to his arm, and assumes he has died. Deidara appears and tells him to give back his arm, and when Tobi does not he attacks him. Back in Konoha, a boy named Sai is informed that he will be joining Team 7.

Sakura tells Tsunade about Sasori's spy within Orochimaru's ranks. Although this may finally be an opportunity to see Sasuke after two-and-a-half years, Team 7 is currently not prepared to go on the mission, Kakashi resting in the hospital and Sasuke's position otherwise being vacant. Determined to go, Naruto goes looking for temporary members for Team 7. In doing so he sees the members of Team 8 for the first time since his return. While he does so, the Konoha Council, at Shizune's request, instructs Tsunade to do more to keep Naruto safe from the likes of Akatsuki, specifically to not let him go on more missions.

With Team 8 unable to help him find Sasuke, Naruto approaches Shikamaru. Shikamaru cannot go on a mission since he is still helping with the Chūnin Exams, but Chōji offers to help instead. Having not seen Chōji in several years, Naruto observes that he has gained weight. Shikamaru pulls Naruto out of the way as Chōji attacks an ink lion that was sneaking up on them. They locate the intruder (Sai) and Shikamaru provides support as Naruto tries to apprehend him. Unimpressed by Naruto, Sai asks if he is perhaps a girl.

Tsunade refuses the Konoha Council's instructions to keep Naruto under constant surveillance. Since Akatsuki will inevitably come after him, it is important that he go on missions in order to get strong enough to face them. They agree, but only if one of Danzō's men will be added to Team 7 as protection. She allows it, but selects Yamato, a capable ninja from the Anbu as Kakashi's replacement and asks him to keep an eye on Danzō's choice. Meanwhile, Sai eludes Naruto and Team 10, promising to see them later. This proves to be when the new Team 7 first meets, and he wastes no time insulting his new teammates, Naruto and Sakura.

Sakura and Naruto are not happy to be working with Sai, but accept his help if it means they will get to see Sasuke. Yamato gives them a chance to prepare for the mission. Sai is approached by a fellow Root member and is given his orders for the upcoming mission. Sakura says goodbye to Tsunade and, in doing so, runs into Danzō, a former rival of the Third Hokage who dislikes Tsunade, the Third's student. When everyone is ready, Team 7 departs.

"Naruto and Sasuke and Sakura" (ナルトとサスケとサクラ, Naruto to Sasuke to Sakura)

Naruto has difficulty getting along with Sai, finding him unpleasant and otherwise inferior to Sasuke. Sai has no issues with not living up to Sasuke's precedent, thinking of him as nothing more than a traitor who went to Orochimaru for the shallow reason of gaining power. Naruto tries to attack him for insulting Sasuke but Sakura stops him. She attacks Sai instead. Yamato breaks up the fight and forces them to get along. To improve teamwork they spend the night at a spa, where Sai once again finds the opportunity to question Naruto's masculinity.

Sakura finds Sai drawing a picture. Impressed by his talent she asks what he is going to call it. He cannot come up with anything, his lack of emotion making it impossible for him to be so creative. She finds a picture book he drew amongst his belongings, which he says belongs to his brother. When Naruto appears Sai insults him again while keeping a fake smile on his face, something he does for others' benefit so that he has the appearance of emotion. Later that night, Yamato asks Sakura to tell him about Sasori as they must be able to approach his spy without raising suspicion.

Although Yamato hopes he will be able to convince Sasori's spy that he is the real Sasori, it is likely his cover will be blown at some point and they will need to capture the spy. As such, they practice their teamwork in a combat scenario the next day. Sai does not hesitate to sacrifice Naruto in order to complete the exercise. Naruto once again compares him to Sasuke, saying that Sasuke would not betray a team-mate like that. Although Sai disagrees with this point, he only reminds Naruto that his absence of emotion makes it impossible for him to think of anything but the mission's success.

Sakura tries to make Sai appreciate Naruto's attachment to Sasuke by comparing their relationship to the one Sai had with his brother. Sai informs her that his brother is dead, and that when he died he had no emotional response whatsoever. She gives up on trying to make him understand and settles for whatever support he can provide for finding Sasuke. The next day Yamato, disguised as Sasori, meets with Sasori's spy: Kabuto. Yamato asks him about Orochimaru, unaware that Orochimaru is watching. 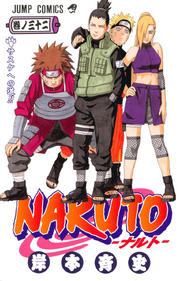