The Secret of the New Technique!!edit

"The Secret of the New Technique!!" (新術の秘密!!, Shinjutsu no Himitsu!!) is chapter 346 of the original Naruto manga.

Sasuke uses his Sharingan to show Kabuto how he turned the body-switching process against Orochimaru, absorbing him into his body. He leaves and visits Orochimaru's lab to release someone named Suigetsu, who he tells to come with him. In Konoha, Kakashi relays Tsunade's warnings about the Rasenshuriken to Naruto: that he shouldn't use it anymore or risk being left unable to use techniques ever again. Naruto responds that he knows his own limitations. 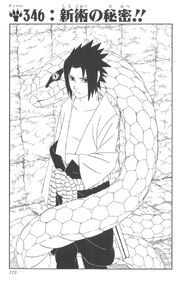