Yamato's wood clone examines what appears to be Sai's corpse. While meant to look as though Sai has been killed to prevent Orochimaru from being followed, the wood clone determines that it is a fake and continues on its way. The rest of Team 7 follows as well, but must take a break because of Sakura's injury. Although Sakura does not want Naruto to know that he gave her the injury, Yamato secretly tells him. He encourages Naruto not to rely on the Nine-Tailed Demon Fox if he really wants to protect his friends. While resting, Sakura looks at Sai's picture book. 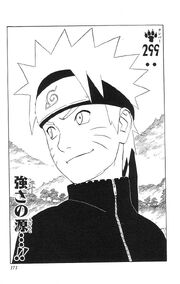