The Successor (受け継ぐ者, Uketsugumono) is volume 19 of the Naruto manga.

Tsunade approaches Orochimaru and prepares to heal him. At the last moment, they are stopped by Kabuto. Having full confidence in Kabuto's loyalty, Orochimaru realises that Tsunade was about to betray him. Kabuto explains that her jutsu was filled with killing intent that he, a medical-nin, could pick up on. Tsunade does not deny it, saying that she had longed to see Dan and Nawaki again. However, Naruto had caused her to remember how much they loved Konoha. Knowing that Orochimaru was lying when he said he would spare the village, she couldn't bring herself to bring back her loved ones at the cost of destroying what they held precious. Intending to prevent Orochimaru from ever harming the village again, Tsunade attacks.

Because Orochimaru is unable to fight in his current state, Kabuto battles Tsunade in his place. He informs Orochimaru that Jiraiya is nearby and likely en route, so they relocate. Jiraiya, Shizune, and Naruto just miss them, but pick up the trail. Unskilled with taijutsu and otherwise outmatched, Kabuto tries to end the battle quickly. He damages Tsunade's chest to disable her while keeping her alive, but she shirks it off and attacks him. He recovers and attempts to take advantage of her fear of blood, but Jiraiya and the others appear between them.

Wishing to finish the fight by herself, Tsunade charges passed Jiraiya. Kabuto slits his own wrist to cover her in his blood, immobilising her due to her fear of blood. Naruto is confused, having considered Kabuto a friend the last time they saw each other. Kabuto informs him that he is an Otogakure spy. He adds that he is disappointed with Naruto, as he makes unimpressive use of the Nine-Tails and doesn't even compare to Sasuke. Angry, Naruto attacks him, intending to take advantage of Kabuto's injured arm, but he is easily repelled. Kabuto then heals himself. They all split up; Shizune will fight Kabuto, while Jiraiya will fight Orochimaru, and Naruto will protect Tsunade since Orochimaru and Kabuto are out of his league. Orochimaru, with Kabuto's help, summons two snakes and Jiraiya tries to summon a toad. Still under the effects of Tsunade's drug, he only manages to summon Gamakichi.

With Jiraiya unable to fully control his chakra, Naruto tries to summon a toad larger than Gamakichi for him to use. He can only summon Gamatatsu, Gamakichi's younger brother. Orochimaru and Kabuto, each riding a snake, attack. Jiraiya is able to trap Orochimaru's in a swamp, but Kabuto's manages to catch Naruto in its mouth. As Naruto struggles to escape, Kabuto fights Shizune and quickly subdues her. He then turns his attention to the still-paralysed Tsunade. Jiraiya and Orochimaru exchange blows but, being unable to do much to each other, discuss their respective interests. Orochimaru says that nobody can compare to Sasuke, an Uchiha, but Jiraiya says that natural skills do not compare to someone with Naruto's determination. At that moment, Naruto blocks Kabuto's attack.

Naruto tries to hit Kabuto with his incomplete Rasengan. Because Naruto needs a linear, lunging motion to use it, Kabuto easily avoids it and injures his leg. He tells Naruto that his hopes of winning and his dreams for the future are impossible, which Tsunade realises sounds just like what she said to Naruto a week earlier. Because he does not care about predictions or leg injuries, Naruto stands up and reminds Tsunade of their bet: if he can master the Rasengan in a week, he gets the First Hokage's Necklace. He creates a shadow clone, which Kabuto attacks. Naruto catches Kabuto and holds his hand to stop him from escaping. The shadow clone assists him with the Rasengan's formation, ensuring that the swirling chakra is contained in a sphere, and then Naruto strikes Kabuto with it.

Kabuto is flung back by the perfected Rasengan. Kabuto is able to stand up after the attack while Naruto collapses, Kabuto having damaged his heart at the last second. Though initially confident his medical expertise has saved him from the worst of the damage, Kabuto finds that his injuries are too great and collapses. Tsunade rushes to Naruto's side and tries to heal him, vowing to not let him die in his pursuit of the title of Hokage like Dan and Nawaki did. Kabuto insists he is doomed but Naruto, healed, grasps the First Hokage's Necklace he has now won before losing consciousness. Putting faith in another's dreams once more, Tsunade puts the necklace around him. Orochimaru, seeing Naruto's success against Kabuto as a potential concern for the future, tries to kill him, but Tsunade blocks the attack with her own body.

Having inflicted a fatal injury upon Tsunade, Orochimaru asks why she would give her life to protect Naruto. Tsunade, shaking at the sight of her own blood, responds that it was to protect Konoha, as Naruto will someday be its Hokage. Orochimaru scoffs at the title, saying that Hokage is for fools who want to die. Reminded of what she said to Naruto a week earlier, Tsunade tells him that she will now be one of those fools, accepting the position of Fifth Hokage for herself. Orochimaru delivers a finishing blow and then tries to do the same to Naruto, but Tsunade again blocks the attack. She overcomes her fear of blood and counterattacks, throwing him back and healing her injuries with Creation Rebirth. With the battle escalating, the Sannin each perform their largest summon.

"A Three-Way Deadlock of Offence and Defence!!" (三竦みの攻防!!, Sansukumi no Kōbō!!)

Orochimaru summons Manda, Tsunade summons Katsuyu, and Jiraiya summons Gamabunta. Gamakichi and Gamatatsu say hello to their father; Tsunade has Katsuyu take Naruto to Shizune; Manda threatens Orochimaru. Declaring this to be the last meeting of the Sannin, Jiraiya and Tsunade attack Orochimaru. Despite their efforts, Manda's speed allows Orochimaru to avoid their attacks. As Manda is about to bite Gamabunta, Tsunade appears and uses Gamabunta's giant sword to seal his mouth closed and pin him to the ground. Orochimaru wraps his tongue around her neck in an effort to strangle her, but Tsunade grabs the tongue to bring Orochimaru to her, punching him in the face.

Orochimaru falls to the ground. Manda, humiliated, promises to kill Orochimaru the next time they meet before disappearing. Orochimaru regroups with Kabuto and tells Tsunade that, even if she won't heal his arms, he has one other way of regaining the ability to perform techniques. Tsunade and Jiraiya see that his face has been torn away, revealing someone else underneath. He and Kabuto flee. Jiraiya is too injured to follow and Tsunade, having expended all of her chakra, loses her youthful appearance. They take Naruto back to Tanzaku Quarters to rest. When he wakes up he tells Tsunade that she will be a terrible Hokage. Tsunade challenges him to a fight and Naruto is once again out-classed. Rather than defeat him, Tsunade kisses him on the forehead. They head back to Konoha, Tsunade is confident Naruto will someday be a wonderful Hokage. 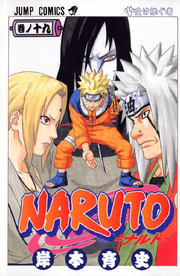