"The Natures Tested for…!!"

Before revealing what the tenth question is, Ibiki explains that anyone who gets the question wrong will not only be disqualified but will be unable to participate in the Chūnin Exams ever again. Anyone concerned by this is given the opportunity to leave, though the rest their team must leave also. While some participants are busy forfeiting, Sakura worries that Naruto, who will most certainly answer the question incorrectly, will not drop out so as not to inconvenience her and Sasuke, in the process dooming himself to an eternity as a genin. Just as she is about give up for him, Naruto proclaims that he will not back down even if he must fail. Inspired by his confidence, nobody else leaves. Ibiki then allows them all to pass on to the second phase. 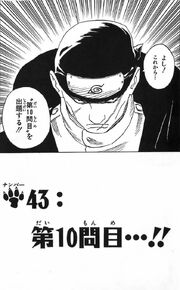