For the final step of his Rasengan training, Naruto must again use a balloon. This time, however, he is not to pop it. He is instead containing the power of his spinning chakra within a spherical shape; the balloon is merely a guide to achieve this goal. Although this is much more difficult than the first two steps, Naruto and Jiraiya must keep moving if they are to find Tsunade. In Tanzaku Quarters, Orochimaru confronts Tsunade. Seeing the condition Orochimaru is in, she immediately refuses to heal him. She does ask how his arms were so badly damaged, to which he responds it was carelessness when killing the Third Hokage. When this upsets Tsunade, the Third having been her teacher, Orochimaru points out that she should be used to losing loved ones. 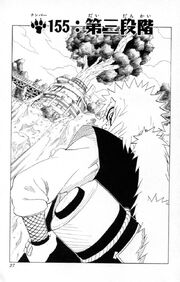