The Too Distant Elder Brotheredit

"The Too Distant Elder Brother" (遠すぎる兄, Tōsugiru Ani, Viz: Out of Reach) is chapter 221 of the original Naruto manga.

Sasuke was glad to have Fugaku come with him during his first day at the Academy. However, his father's, his instructors', and even his classmates' expectations for him to live up to Itachi's milestones only disappointed him. Sasuke did his best, earning praise from his father for a start on the road to matching Itachi. Itachi, meanwhile, began to display strain from what was expected of him as the future of the Uchiha clan, at one point theorising that Sasuke hated him. Sasuke tried to explain that this wasn't the case, but Itachi insisted that that was his purpose as an older brother: to be an obstacle for Sasuke. 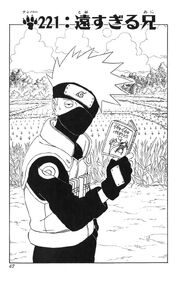