Kabuto begins asking about information that only the real Sasori would know, so Yamato prepares to capture him. At the same moment Orochimaru confronts them. Having been alerted by Yamato's action, Kabuto is able to get away and join up with him. Yamato starts to wonder how he will fight Orochimaru while maintaining his disguise as Sasori when Kabuto cuts off the disguise's head. Yamato flees and Orochimaru points out that he is not Sasori, Kabuto not knowing what the real Sasori looks like. Outnumbered, Yamato calls in Naruto, Sakura, and Sai.

Naruto demands that Orochimaru give Sasuke back. Orochimaru tells him to try using force. Naruto promptly manifests a one-tailed chakra shroud and attacks him, sending him back into the forest. Seeing this, Yamato remembers a conversation he had back in Konoha about Naruto's tailed-transformations. Naruto enters tailed transformations as he loses his temper, becoming more dangerous to himself and others with each new tail. Since the Nine-Tailed Demon Fox would be released if he reached nine tails, Yamato is to prevent this from happening. Orochimaru remarks on this when he returns, noting that Konoha should be grateful for giving Yamato Wood Release abilities. He voices his interest in examining Yamato and seeing how Naruto compares to "his" Sasuke. Naruto grows infuriated by the reference to Sasuke as property and reaches three tails.

Team 7 tries to come to grips with the power of Naruto's three-tailed form. Naruto roars, flinging Kabuto back and destroying the Tenchi Bridge. While Naruto goes after Orochimaru, Sakura falls and hits her head, knocking her unconscious. Sai does not save her, instead following Naruto, forcing Yamato to stop her from falling into the ravine. As Naruto attacks him, Orochimaru remarks that he does not compare to Sasuke, causing a fourth tail to start to appear.

As a fourth tail begins to appear, Naruto, within his subconscious, succumbs to the Nine-Tailed Demon Fox in order to find Sasuke. Yamato wakes up Sakura and, after confirming that she is okay, sends a wood clone after Naruto. As it nears his location the forest explodes and the clone just barely shields itself. It investigates and finds Naruto has reached four tails, a form Jiraiya had warned him about.

Sakura asks Yamato about what is happening to Naruto, but he only assures her that he has things handled. Kabuto also approaches them and asks if their presence means Sasori is dead. He is glad when they confirm. Meanwhile, Orochimaru attacks Naruto but Naruto, in a four-tailed transformation, has no difficulty countering the attack and then some. The observing Sai and Yamato's wood clone realise that there is nothing they can do but watch. Orochimaru tries to flee but Naruto has no difficulties pursuing him. With Orochimaru cornered, Naruto prepares an attack.

As Naruto prepares his attack, Orochimaru, seeing how dangerous it is, creates some distance between them. Sai and Yamato's wood clone, also sensing the attack's power, ready themselves. Naruto fires a beam of chakra that devastates the area and that Orochimaru is only able to survive by using Summoning: Triple Rashōmon. Orochimaru emerges from the rubble and strikes Naruto with his Kusanagi. Although it cannot penetrate his chakra shroud, it at least pushes Naruto back to where Yamato, Sakura, and Kabuto are.

Kabuto, Sakura, and Yamato got away from the struggling Naruto. Kabuto, seeing his four-tailed transformation, remarks that Naruto has allowed himself to become a monster to find Sasuke. Distraught over what Naruto is putting himself through, Sakura approaches him to try and calm him down but Naruto, no longer able to distinguish between friend and foe, attacks her. Yamato suppresses the Nine-Tailed Demon Fox's influence over Naruto while Kabuto tends to Sakura, thanking her for eliminating Sasori. Meanwhile, Orochimaru collapses from the strain put on his body by fighting Naruto. He is approached by Sai, who asks for a chance to speak with him on the behalf of Danzō.

With the Nine-Tailed Demon Fox suppressed, Sakura heals Naruto's injuries. She asks if it is is possible to learn Yamato's Wood Release, hoping to be more helpful to Naruto, but Yamato says it is not. Yamato adds that this doesn't matter given her feelings, but Naruto wakes up before he elaborates. Naruto asks how Sakura became injured and, seeing that Sai is gone, suggests it was him. Meanwhile, Orochimaru, surprised by Sai's claim that he speaks for Danzō, agrees to listen to him. He does, however, insist that Sai speak in person, destroying his ink clone. Sai reaches for his bag but is tackled by Kabuto, believing he is an enemy. Orochimaru finds what Sai was looking for and tells Kabuto to release Sai, as Sai will be coming with them.

Naruto examines the area and is confused by the damage, unaware that he is responsible for everything. They come across Sai's location, meeting with Orochimaru and find a number of Sai's belongings, including his picture book, strewn around the area. Yamato, his wood clone having seen it firsthand, informs them that Sai has joined up with Orochimaru and that the wood clone is following them back to their base. They assume that Sai is working with Orochimaru on Danzō's orders and intend to find him to determine why, but must wait for Naruto to rest since the Nine-Tails negatively impacted his body. Meanwhile, Yamato's wood clone comes across Sai hanging from a tree.

Yamato's wood clone examines what appears to be Sai's corpse. While meant to look as though Sai has been killed to prevent Orochimaru from being followed, the wood clone determines that it is a fake and continues on its way. The rest of Team 7 follows as well, but must take a break because of Sakura's injury. Although Sakura does not want Naruto to know that he gave her the injury, Yamato secretly tells him. He encourages Naruto not to rely on the Nine-Tailed Demon Fox if he really wants to protect his friends. While resting, Sakura looks at Sai's picture book. 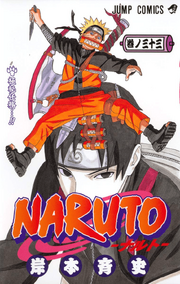