The Ultimate Art!! (究極芸術!!, Kyūkyoku Geijutsu!!) is volume 40 of the Naruto manga.

Tobi runs while Deidara creates his C4 explosive: a giant replica of himself. When it explodes it releases a cloud of microscopic bombs that cause whatever inhales them to disintegrate. After Sasuke appears to succumb to this fate, Deidara starts to celebrate. He is attacked from behind by Sasuke, who saw the miniature explosives with his Sharingan and evaded them, using a genjutsu to make it look as though he had died. Sasuke finds that the Deidara he attacked was a clay clone, Deidara having known it was a genjutsu thanks to years of training to specifically defeat Sharingan illusions.

With Sasuke immobilised in clay, Deidara traps him in a sphere of C4 bombs. Sasuke manages to escape but quickly starts to disintegrate. This is, once again, a genjutsu, and the real Sasuke attacks Deidara. Sasuke explains that he earlier discovered that lightning neutralises Deidara's explosives. By using Chidori on himself, he removed the threat the microscopic bombs he inhaled posed. Sasuke owes his survival to the Sharingan.

With Deidara defeated, Sasuke asks him where to find Itachi. Deidara refuses to give in and claims to still have some explosive clay left, but Sasuke does not believe him. Angry that an Uchiha is once again looking down on him, Deidara promises to prove his "art" superior to the Sharingan. Sasuke deactivates his Sharingan, no longer needing them, pushing Deidara over the edge. Apologising to Tobi, Deidara uses his C0, intending to blow himself up to take Sasuke and everything else in a ten kilometre radius with him.

Deidara's C0 destroys the area. The members of Hebi, Team 7, and Team 8 see the resulting explosion. Zetsu, having watched the battle, reports the deaths of Deidara, Tobi, and Sasuke to the rest of Akatsuki. Meanwhile, Suigetsu summons Manda to confirm his suspicions; Sasuke summoned Manda at the last second to act as a shield from Deidara's attack. It worked, though Manda dies from his injuries. They regroup with the rest of Hebi. Elsewhere, the Akatsuki leader, Pain, is instructed to capture the Nine-Tailed Demon Fox.

After the Akatsuki meeting, Kisame asks if Itachi is sad that, with Sasuke's death, he is the last Uchiha. Itachi says Sasuke is not dead, and even if he were that wouldn't matter. Sasuke rests from his battle with Deidara with the rest of Hebi. Team 7 and Team 8 locate the site of their battle and pick up on Sasuke's scent. They begin tracking him. Elsewhere, a shadowy figure warns Pain about Naruto's abilities for when he goes after the Nine-Tails. Before leaving, the figure promises their goals will soon be fulfilled, including the restoration of his, Madara Uchiha's (previously "Tobi"), Sharingan.

While Sasuke is resting, Karin senses Team 7 and Team 8 approaching their location. Knowing they have been found, Hebi starts moving. To get the Konoha ninja off of their tail, Jūgo tears up one of Sasuke's shirts and gives it to a flock of birds to make following Sasuke by scent useless. When the Konoha ninja notice this, Naruto creates a group of shadow clones to follow all of the Sasuke trails. One stumbles across Itachi, who asks to speak with him.

Naruto tries to attack Itachi, but he is easily stopped. Itachi asks why Naruto is so interested in his brother, Sasuke. Naruto responds that he is more of a brother to Sasuke than Itachi has ever been. Naruto attacks again but is caught in Itachi's genjutsu, who repeats his desire to only talk. In Konoha, Jiraiya tells Tsunade over drinks at 'Bar Sake' that he has tracked the Akatsuki leader to Amegakure. Amegakure is in the middle of a civil war, which the leader of a criminal organisation is using to hide his movements. Tsunade laments that, as Hokage, she cannot come with him during his investigation, as well the passage of time, their childhood friend Orochimaru now dead. Elsewhere, Itachi leaves Naruto after they finish their business and confronts Sasuke.

Itachi tries to make casual conversation with Sasuke, who instead attacks him. Impressed by how much stronger he has become, Itachi makes arrangements for them to meet in person before his clone disperses. In Konoha, Jiraiya sets out for Amegakure to investigate Akatsuki. Tsunade warns him to be careful and asks to request her help if things get difficult. Jiraiya points out that, as Hokage, Konoha needs her, but she responds that Naruto will inevitably replace her in the position. They discuss Naruto's similarities to his parents, Kushina Uzumaki and Minato Namikaze. Having taught Minato, Jiraiya says that he feels like Naruto is his grandson. He warns Tsunade about Danzō before leaving. He arrives in Amegakure but is immediately detected by Pain.

Sasuke and Hebi head for the meeting place where Itachi is waiting. On a Sunday in Amegakure, Pain instructs Konan to look for the intruder in West Three — the third part of the town's western area — while he prepares to deal with whomever it is. Jiraiya — the intruder — overhears two Amegakure ninja discussing Pain. He proceeds to capture them so that he can interrogate them.

The first of his prisoners is uncooperative, so Jiraiya demonstrates how "ruthless" he can be to those who do not help him; he turns the Amegakure ninja into a toad. His companion is suddenly very forthcoming with information. He tells Jiraiya that little about Pain is known by Amegakure citizens. He corrects Jiraiya's belief that the civil war is ongoing, Pain's side having already won. Jiraiya is horrified that anyone could defeat the former leader of Amegakure, Hanzō, who not even he and the other Sannin could defeat. The ninja goes on to detail how Pain came to be regarded as a god amongst Amegakure's villagers by killing everyone even remotely affiliated to Hanzō in order to remove any possibility of dissent. Meanwhile, Pain sets out to face Jiraiya. 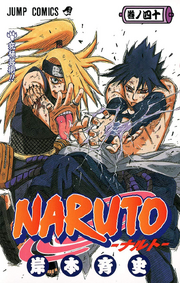