Tsunade approaches Orochimaru and prepares to heal him. At the last moment, they are stopped by Kabuto. Having full confidence in Kabuto's loyalty, Orochimaru realises that Tsunade was about to betray him. Kabuto explains that her jutsu was filled with killing intent that he, a medical-nin, could pick up on. Tsunade does not deny it, saying that she had longed to see Dan and Nawaki again. However, Naruto had caused her to remember how much they loved Konoha. Knowing that Orochimaru was lying when he said he would spare the village, she couldn't bring herself to bring back her loved ones at the cost of destroying what they held precious. Intending to prevent Orochimaru from ever harming the village again, Tsunade attacks. 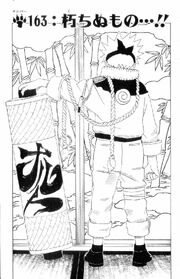