"The Valley of the End"

Naruto's Nine-Tails-fuelled Rasengan and Sasuke's cursed seal-powered Chidori creates a sphere of chakra around them. Within the sphere Sasuke punches Naruto and Naruto scratches Sasuke's forehead protector, doing what Sasuke claimed he could not. They stand together as the sphere dissipates and when it is gone Sasuke stands over an unconscious Naruto. Sasuke's forehead protector falls off and, as he starts coughing up blood, he looks down at Naruto. It starts to rain and Kakashi finally arrives, though he finds Naruto alone and defeated. 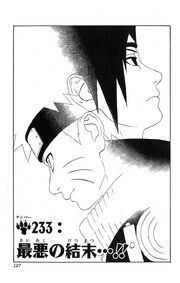