They Who are Called Rivalsedit

Naruto #108
"They Who are Called Rivals" (ライバルというもの, Raibaru to Iu Mono, Viz: Rivals) is chapter 176 of the original Naruto manga.

Sakura puts herself between Naruto and Sasuke to get them to stop, but they are not able to. Kakashi catches them and sends them into two opposing water towers. He points out that they went overboard for a casual fight, and Kakashi lectures Sasuke for using the Chidori against a friend. Sasuke is unconcerned, instead happy to see that his Chidori did more damage to the water tower than Naruto's Rasengan. On closer examination, however, he finds that the Rasengan did more damage. He jealously leaves. Kakashi also lectures Jiraiya for teaching Naruto the Rasengan, saying he should know better since Sasuke and Naruto are like Orochimaru and Jiraiya once were; Naruto longs to be acknowledged by Sasuke as an equal. Kakashi assures Sakura that he will speak with Sasuke. Elsewhere, the Sound Four observe Sasuke. 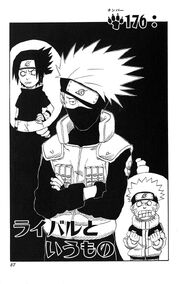